Close to a Grand Slam 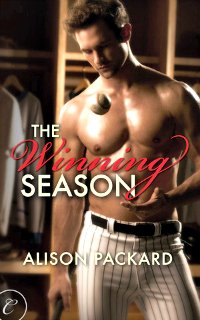 The first time they met, they hated each other. Then Matt Scanlon, an MLB catcher riding a self-destruction rocket to rock bottom, got traded to his rival team, the San Francisco Blaze, and comes face-to-face with Kelly Maxwell in a professional capacity. Maxwell is the publicist for the Blaze.

Second impressions - for both of them - were no better than the first.

All Matt wants is to be left alone while he tries to pull his life back together after a long, painful year of bad decisions and worse actions. He refuses to talk to the media vultures clamoring for an interview, no matter how intently Kelly badgers him. If pushing her buttons and being an ass keeps her off his back about it, well, that's not exactly a hardship. Especially when it hits him that Kelly Maxwell, professional ball buster, is pretty damn gorgeous when she's riled.

He's the bane of her existence. The insufferable, boorish jackass is making her job hell. Kelly doesn't know why Matt suddenly went from being the golden boy of baseball to a self-made pariah, nor does she care. She's stuck with him for now, so she'll do whatever it takes to get him to tow the publicity line. And if it just so happens that doing her job forces her to get in that shockingly handsome face of his at every turn, well, maybe that isn't so bad after all.

Matt never expected that sparring with the fiery Kelly would become the highlight of his day. He's not sure what that means, exactly, but he knows one thing. If he can't convince her that he's sorry for their past and he's genuine in his interest in her, she'll toss him out of the game before he can even make it to the plate.

I like sports romance and I love the enemies-to-lovers trope, so I have to admit, I was predisposed to enjoying the heck out of this sexy, fun little reading treat, but Packard really went above and beyond for her readers with this one. Not only were the characters fairly awesome, especially the tomboyish, foul-mouthed (though she's working on that) Kelly, but the plot had enough meat on its bones to satisfy even the pickiest reader.

Baseball isn't really my thing as a sport (I'm a football fangirl), and I don't know much about it, but even my untrained eye was impressed by the authentic-feeling touches Packard put into the story. There wasn't a huge baseball element (a fact I appreciated), but what was there felt very much like it was written by someone who not only understands the sport more than I do but likes it. That was a particularly nice touch and, oddly enough, fairly rare in the sports romances I've read.

Kelly and Matt had a nice bit of depth as characters, too. Kelly, who deals daily with the harsh realities of surviving an eating disorder, isn't your typical romance heroine in form or function, and I liked that about her. Matt, probably the more stereotypical of the two of them, didn't make any better a first (or second) impression on me than he did on Kelly, but allusions to the cause of a lot of his personal demons kept me from writing him off precipitously and he evolved rapidly enough after that to win me over.

That was a good thing, because he had a lot of evolving to do. I've rarely read an enemies-to-lovers themed romance in which the "enemies" part of the plot was so completely justified. If any man ever spoke to me the way that Matt spoke to Kelly on their first meeting, I don't know that I would've been as violence-free as she was. Kudos to Kelly for her ability to handle him with a vicious verbal volley that reverberated long after their initial encounter.

And kudos to Packard for divulging that scene when she did, because if it had come at the beginning of the book, I can't say I would have continued the story long enough for Matt to redeem himself.

My only disappointment with the read came, unfortunately, at the end of the book. The relationship conflict was predictable, obvious, and cliched, and the resolution was downright unsatisfying. After such a great buildup, with a slowly evolving romance and a positively wicked amount of sexual chemistry between Kelly and Matt, the end felt more like a wham-bam-thank-you-ma'am and it left me a little agog. A few dangling secondary plot threads lent it an unfinished feel, too, which didn't help matters.

I could have handled the lack of satisfactory resolution on those plot threads, because there was setup in this book for another story in that world (though nothing I could find about this being a series, despite the character connections to Packard's debut novel, Love in the Afternoon), but the romance resolution left a mark. Just about everything that preceded it, though, was great - some was even more than great. It was certainly enough to make me a fan of both the book and of Packard's writing, if not the sport of baseball (nobody is that good).

Return from The Winning Season to Contemporary Romance

Return from The Winning Season to Sports Romance

Return from The Winning Season to One Good Book Home