This Case Is Gonna Kill Me 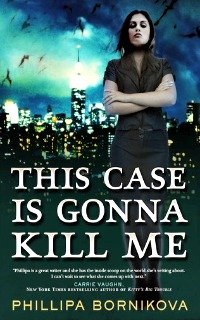 Disclosure:   An ARC of this book was provided to me by Tor Books publisher Tor/Forge via NetGalley. This rating, review, and all included thoughts and comments are my own.

Maybe it used to be a dog-eat-dog world, but since humans became aware of the existence of the Powers - vampires, werewolves, and elven Álfar who have been integrated into society and hold positions of power in the country and around the globe - it's a different sort of feeding frenzy altogether. Not that Linnet Ellery feels that way. She was fostered in a vampire Household and groomed for the law.

After graduating top of her class and passing the bar on the first try, Linnet is excited about her new position with a prestigious White-Fang law firm. At least she is until the case from hell is dropped in her lap, her co-workers shun her, and the managing partners make it quite clear her position is strictly on suffrage. Then the case she's working on takes on a sinister turn.

Her boss is killed and Linnet barely escapes being mauled by a werewolf. And that's just the first in a long line of Very Bad Things that make Linnet feel less than safe and nowhere near welcome at her new job. If, on top of all that, she can't close a case that's been floundering on the firm's books for over twenty years, she may as well just start running and keep on going.

Then again, it's become clear she'd be better off doing that even if she can close the case.

Bornikova's imaginative debut hits a lot of the right notes for me. I really enjoyed the world she's created, and Linnet was an appealing main character. The mix of urban fantasy and legal thriller worked surprisingly well within the framework of the setting, the plot, and the characters. It was sort of like the bastard child of The Vampire Diaries and The Pelican Brief. With significantly less faux-teen angst.

Maybe most compelling to me is the evolution of Linnet's character throughout the story. She starts off at a severe disadvantage, disappointed in her job, worried about keeping it, and a bit timid with it all. She's fairly meek when faced with workplace harassment and ostracism, as well, as she's desperate to make as few waves as possible.

Then she survives a couple of werewolf attacks in ways that get more and more delightfully outlandish, and instead of being scared away, she starts to really dig in and stand her ground. With each turn of the page she comes further and further out of her shell and became more appealing to me as she did.

She'll never be a prototypical kick-ass heroine. She's a human female lawyer in a world dominated by old school male vampires and several very bad doggies. Her inner warrior-woman is more business casual than leather, a Harley, and a sawed-off. Linnet instead holds her own with judicious use of her sharp intellect, guided by a deep sense of right and wrong, and motivated by sheer persistence. I liked that about her.

I wish the world had been better explained and further defined. I never felt like I got more than a taste of the paranormal and supernatural elements in and of this creative almost-reality. Too many things were hinted at or alluded to or mentioned in passing, too few things given clear, in-depth definition. By the end of the book I had a ton of questions that didn't come close to even being addressed, let alone answered.

Instead, there was a plethora of superfluous information and minutiae in the narrative. The first third of the book in particular was particularly sluggish because of it, and several sections after that got bogged down as well. i.e. While I appreciated Linnet's love for and history with horses for the depth it added to her character, neither my interest nor the pacing of the story were benefited by having every horse in the book (a surprising number of them) identified in detail and equestrian riding described so thoroughly.

And that's just one example among many. A tighter grip on the editing could have smoothed out several rough and bloated spots, sped up the pace, and allowed for heightened emotional impact regarding the plot-driven external conflicts.

Linnet's huge case never really inspired me to care too much about its outcome, either. It was a little too distant, the interested parties a little too hostile, the quagmire of former actions, rumors, and suppositions all stayed just beyond my ability to invest my emotions. It was the case that caused the most plot conflict in the book, both directly and indirectly, but it wasn't a strong conflict for me.

The few pages given to the deposition between the battered wife and the stalker werewolf husband had a far more visceral emotional impact and that was just a tiny part of the overall story.

Romance fans will be happy that Linnet has a love interest that comes into play in the story. I liked him well enough, but I found the vampire David Sullivan's character to be more intriguing to me personally for some reason. I kept hoping for more about him or more scenes featuring him. And his scene in the park was awesome.

This book had its ups and downs, but I have to say, it really is an original and imaginative world that Bornikova created for her characters. Next time I hope to find out more about it. Hell, I hope there is a next time. Linnet really grew on me, to the point that I would be very disappointed if I don't get a chance to revisit her and several other characters who have wormed into my head and made themselves at home.

Return from This Case Is Gonna Kill Me to Urban Fantasy