More Good than Bad, But Nothing Great 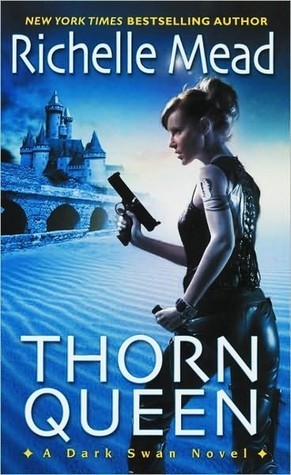 I don't think I'm going to enjoy writing this review very much, because I'm sort of torn about how I feel about the book. I really enjoyed Storm Born and was looking forward with much anticipation to Thorn Queen but I'm left feeling a bit disappointed. I want to preface my review by explaining that I think Richelle Mead is a good author and a solid story teller (no, they aren't the same thing). I find her books to have depth in both plot and characters (she's especially gifted with secondary and ancillary characters) and of the two series I've read, this one and the Georgia Kincaid series, they are generally a nice way to spend a few dollars and a few hours.

And actually, that's sort of the problem. It's only a nice way to spend them.

Technically, Mead's good. She delivers. But where Storm Born was an exciting premiere, Thorn Queen was more similar in - well - in emotional aftertaste to the Kincaid series than I would like.

I stopped reading that series after two books because there just never seemed to be enough happening beyond Georgia angsting over her life as a succubus or her relationship with her boyfriend. Solid enough stories without anything truly exciting or motivating me to continue. Every time I finished one of those books I was left feeling so ambivalent that it didn't seem worth continuing.

Storm Born was a nice change. I enjoyed Eugenie Markham (except for that god-awful name - seriously - EUGENIE?) and appreciated her dilemmas as they kept piling up. The only thing I didn't like about Storm Born was her relationship with Kiyo, and it kept it from being a five star book for me. I had hope that Mead would give us a series of excitement and anticipation.

Then I read Thorn Queen.

It's not a bad book. In fact, like with all the Mead books I've read, it's enjoyable while going through it. For some reason, it's when I put Mead's books down and really think about what I read that I start having problems. I don't know why. Similar to the Kincaid series, I was left feeling like most of this book had more to do with what was going on around the central plot than it had to do with the plot itself - and the central plot itself just wasn't that interesting. It was a great premise - something's stealing gentry in the Thorn Queen's domain and while Eugenie struggles with her duality of self and emotion, she's got to figure out what and stop it while she also keeps the land alive, her people fed, and her humanity guarded.

I'm just not sure how to sustain belief in the strength of a main character who has a smothering and overprotective lover who lacks any comprehension of her core self. A lover who keeps trying to guide her away from the inevitable. A lover who spends almost all his time with his pregnant ex - without ever giving Eugenie a reason why that relationship is history, or how ancient it is, now that I think about it - and it sure as hell wasn't that ancient if the fantabulous Queen Maiwenn was so early along in the pregnancy that she wasn't even showing at first. Then when she does start showing, Kiyo expects Eugenie to make nice with Maiwenn and her impending kit. After lying to Eugenie about it from the beginning. Uh. Yeah.

I'm understanding and all, but sheesh, if Eugenie bent herself any more for this guy, you could salt her and sell her at ball parks.

Not to mention that as far as whirlwind romances go, the one between Eugenie and Kiyo sucks. They couldn't be more incompatible. Unfortunately, the development of that relationship in Thorn Queen and the resolution that followed was neither interesting, healthy, nor adult. Unfortunately, it also didn't feel like that solid of a resolution because Eugenie is the Queen alright - but it's of emotional indecision.

That being said - I love Dorian. Love him. He's so deliciously self serving yet devoted. So layered. You know exactly where you stand with Dorian, because he'll tell you - whether you want him to or not. He's filled with his own agenda, and yet...

The following paragraph has been hidden because it contains spoilers. If you want to read it, simply click on the button below.

...when he tells Eugenie that he wouldn't care if she rules the Otherworld or goes back to just exorcising spirits, he's never letting what happened to her happen again, I just smiled.

Here's a guy who loves her, supports her, is interested in helping her, and regardless of her choice in the baby department, still wants to be with her. Not to mention he's an adult that understands that life is never black and white. Black and white is for children. Life is all about managing the gray areas as best you can until you die.

Um. Yeah. Run in the other direction, Eugenie, he's bad for you!! Just...send him my way.

I'd love, though, if just once Eugenie - when facing a plethora of smothering protectors and erstwhile defenders - would just look at them and say, "Thanks guys, I appreciate it and all, but I can kick my own asses. Fight beside me. Watch my back while I watch yours. Help me all you want and I'll do the same for you, but the only protection I need is some Coppertone SPF70."

Maybe Eugenie will get there someday.

That day was not today.