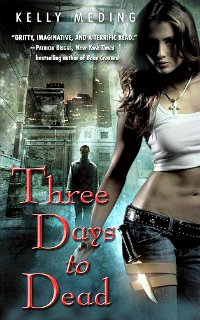 You think dying is hard? Resurrection is a killer.

Dreg Bounty Hunter Evangeline Stone's memory is hazy about the events leading up to her death, but what she does remember isn't exactly chock-full of warm fuzzies. Genocide, betrayal, pain, loss. Hunted as a traitor, her team murdered, the friends who gave her shelter mercilessly slaughtered.

It was a nightmare she didn't survive.

Now she's been brought back, waking up in the morgue in a stranger's body with no clue who to trust and far more questions than she has answers. The one thing she does know is she's screwed either way. Being brought back is not without its consequences, after all, and she has only three days to solve her murder and figure out who betrayed her team, because as if resurrection wasn't complicated enough, it also comes with an expiration date.

In three days Evy will be dead...again.

Meding hits the ground running with this action-packed, ass-kicking series debut. The story drops readers into Evy's world just as she's been resurrected, then takes off at a sonic pace from there with an ultra-quick and dirty glance at the world and the events that preceded her death just pages before the plot really starts to get going. Once that happens, you pretty much have to hang on by your fingernails just to keep up as the time ticks down on Evy's new-life expectancy. There's certainly no rest for the weary as she races around searching for answers, trying to keep one step ahead of the people who are still trying to make her dead.

I enjoyed the world Meding created for her characters and the series. At least the glimpses I got of it. The break-neck pace of the plot didn't allow for a lot of in depth world-building...or much character depth, definition, or development either, actually. Maybe it's better said that I liked the idea I got of the world as it raced by my reading window. I can't say it's the most unique world I've ever read, as it resembles several other urban fantasy series in one way or another, and the heroine Evy is fairly interchangeable with those in other books, but that has its own comforts when it's a book in one of your favorite genres. And there were a few points of originality and elements based on a unique premise.

The first chapter or so seemed a little odd to me, though. The memories of Evy's life before she died were revealed in her first person narration in such a way that it made me feel like I'd missed an earlier book or a prequel or something. On one hand, I suppose that's a compliment to the author, for taking story building blocks and turning them into what felt like visceral memory for the character, but I found it jarring. And the echoes of those issues, with the ramifications of events in the past having an effect on the current events of the plot, were sprinkled throughout the narrative, shaking me out of the story now and then all the way through the book.

It was an ambitious, complex plot with a healthy number of secondary and ancillary characters, but because of the pacing, I found it hard to really feel connected to what was going on and to whom. My emotions didn't engage in the read as I was hoping they would. And like I said, there wasn't a tremendous amount of character depth or room for a lot of character or relationship growth. There was a thread of romance that wended through the plot that I appreciated, and I enjoyed Evy and Wyatt together, but there was so much going on around them that even the romantic elements weren't completely satisfying for me.

Evy handled herself well as the kick-ass heroine, but I can't say I was always thrilled with her as a character. There were moments when I found her a little unlikable, but then she would pull it back or shift gears and I could enjoy her more for the take-no-prisoners fighter that she was. I didn't have any such problem with Wyatt. I enjoyed him throughout the story. His strength and commitment to Evy, what he did for her and how he handled her and why, made me all mushy for the guy.

I do think the plot sort of got away from Meding late in the book. Not a lot, but just enough to muddy the waters a little, making it hard for me to keep solid track of everything that was going on and everyone it was affecting. With such a fast-paced tale, the characters don't have a lot of down time, and plot points are shot at you like bullets from a Tommy gun, which made it was hard to focus on the big picture sometimes. The final conflict and subsequent resolution were strong, though, and it definitely set up the following books in the series well.

There were several good things in this series debut, and while I can't say my issues with the lack of world-building and character definition, or my trouble with the emotional disconnect, allowed me to be completely satisfied with the read, it was better than an okay read. It served well as an introduction into a world with characters that I could probably really start to care about with more time invested. And it definitely had other points in its favor. With Evy in the driver's seat, new life-threatening or world-ending danger can't be far behind, and her and her friends and tentative allies have a lot of potential to stand out in a crowded field.

Return from Three Days to Dead to Urban Fantasy

Return from Three Days to Dead to One Good Book Home