This Magical Menage (M/F/M) is Charming AND Sizzling 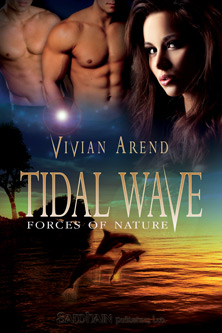 Alexia Colton had spent every summer since she was fourteen visiting her grandmother in the charming seaside town of Jaffrey's Cove, until adulthood and the need to work kept her away. She loves the ocean, and always felt a sense of peace and home there, and was always enchanted by the dolphins that often play in the surf just off the shore. When her grandmother, a once strong and vibrant woman, now feeble and needing help to move into an assisted living facility, calls Alexia sounding frantic, Alexia rushes to her gram's side to get her settled. Sharing this time with her grandmother, whom Alexia can tell is starting to decline in health and mental acuity, is invaluable to her, and when Victoria offers her granddaughter her seaside home and a stunning family heirloom, Alexia takes the necklace but declines on the house. Her work is in the middle of the country, after all.

Soon Alexia is having erotic dreams of the boy, now a man, she'd once met as a child, making love to her in a cavern she's dreamed of her entire life. And her gram is acting stranger and stranger...and significantly less feeble than she'd been when Alexia first arrived. The ocean is calling to her and her body is burning with unfamiliar hungers. Alexia's world is shifting and she'll soon realize that she's not as human as she'd always thought, mermen are real, and the dolphins she's loved her whole life are all citizens of Jaffrey's Cove. And Alexia herself is the new matriarch of their pod, with two gorgeous and dedicated consorts, the cousins Joshua and Anthony, to love her body, heart, and mind for as long as she chooses. What's not to love about life changes like that??

I don't need to spend much time on the erotica aspects of Tidal Wave. The sex is sizzling hot and extremely well done. Arend manages a nice blend of emotion driven sexuality and explicit sex that's extremely satisfying and too rare in erotica romance. I also have to give her credit for how deftly she managed to keep the sex scenes (of which there are several...it's erotica, after all) from completely overshadowing or eclipsing the plot and character development. That's rather a nifty accomplishment in a novella length story, which tends to suffer in those areas to begin with. Also, I'm very very picky about my reading choices when it comes to menage a trois erotica, when I read it at all. It's not a particular favorite of mine and I rarely find menage done in a way that appeals to my tastes. Tidal Wave mastered that for me. I was exceptionally pleased with all sexual aspects of the story.

The other parts had a few bumps of a less erotic kind. This isn't the first story or series I've read by Vivian Arend. I've read several of the Granite Lake Wolves, as well, so this wasn't too much of a surprise because I've had this issue with her as an author before. Arend tends to master the sex and the emotion of a story in very short order, but the plot and characterizations sometimes have issues, as Tidal Wave does. Some of that is the nature of the beast in a novella. I like the way Arend writes and I'm greedy, so I want there to be more meat to the story, but to have more meat you have to either sacrifice some of the sex or write a book. While I have high hopes that Arend will eventually write a full length novel, with her novellas, she has a tendency to skimp a bit on fully developing the mythos of the world she's built in each story. In Tidal Wave that was a particular shame, because I would've loved learning more about the merpeople and spent more time with them in their dolphin form. I found the concept behind the plot to be fresh and unique and that's so rare it should be fully explored.

There were a couple of plot holes and characterization blips that got ignored in this story. Why was Joshua sent away every summer Alexia returned to Jaffrey's Cove after the first time they met and shared a sweet kiss when she was fourteen? He wondered but there was never an answer given. Why was he treated so dismissively by his brothers? Why did Alexia dream of the cavern before ever going there and before receiving the medallion? No one ever had before. Those holes were frustrating.

There was no explanation for Joshua's sudden calm acceptance of his cousin vying for Alexia's affections when earlier in the story he was quite adamant about being her only. The quick turn around in Anthony's case, from him telling Joshua he wasn't really interested in answering Alexia's call to being all gung ho about consorting with her was addressed, but in a cursory way at best that felt unsatisfying. Michael's plot thread was a very nice conflict and it added some depth to the story, but it wasn't as fleshed out as I would've liked, lacked a real solid motivation given the defined mythos of the pod, and the resolution was lackluster. Victoria was a nice secondary character, but she wasn't used as much as she could've been and she sort of left her granddaughter with very little understanding of her people. You'd think the former matriarch would care a little more than just passing off a necklace before disappearing.