To Adam With Love

Dark Fiction Too Grim For Me 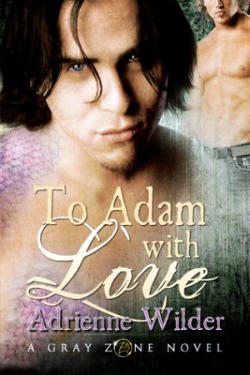 When there's nothing left in your life and nowhere to go before you become something other than human, you return to the Gray Zone, a broken, hopeless place that forms an uneasy boundary between the humanity in Atlanta and the Dens of the Kin. Adam has returned to the Gray Zone after five years away, his needs such that he has little choice but to face the memories and ghosts of his complicated and traumatic childhood.

As he approaches the change that will transform him into a Kin/human hybrid known as Lesser-Bred, his hungers for sex and blood have sharpened beyond the point of him being safe among humans. Though he's been away a long time, he can't help but hope that the one source of comfort he had as a child is still around, a young boy who had been both his best friend and his first love. The young human raised by Kin to be food was a nearly feral child who didn't know what love was, but he'd claimed Adam as his own so very long ago. Like Adam, that boy would now be on the cusp of manhood. That boy named Ean.

Ean had grieved for his Adam, the Kin Batu having told him that his boy had died five years ago. Now there is a new man in the house Adam had once lived in, and he smells like memories and yearning and a need Ean doesn't understand. Coming face to face with the interloper kindled the sort of joy that Ean hadn't known existed. His Adam hadn't died as he'd been told. His Adam had come home. And Adam needed Ean in ways that Ean was more than familiar with and more than willing to satisfy. There's nothing Ean wouldn't give, wouldn't be, to ease Adam's transformation. Even if the cost is his life.

Ean may not know love, but more than anyone, he understands sacrifice, and for his Adam, no price is too steep.

Every once in awhile I come across a book that confounds me, disturbs me, or just generally makes it difficult to rate. To Adam With Love is one of those books. As much as I appreciate the occasional darker, edgier romance, especially when coupled with paranormal elements, too much of the world and mythos created here by Wilder crossed that hard-to-define line between dark and edgy and grim and hopeless for me to be able to say I liked it, and there were a few too many story-related issues for me to fully embrace it on an artistic level.

It was certainly imaginative and original. It had sultry, sexy moments and reflected a genuine, believable sense of the innocence of youth and the otherness of the Kin in well-written flashbacks of the shared childhood history of Ean and Adam. I found it almost compulsively compelling in that regard, as the ever-present sense of impending doom was too visceral to tear my gaze away for long lest I miss a crucial piece of this complex, complicated story. I can even say with all honesty that I easily understand why this book would be wildly popular among fans of darker fiction.

Yet I can't say I liked it.

As much as I appreciated the Glossary at the beginning, I felt there was a noted overuse of the italicized words from the Glossary in the narrative. Part of my problem with that is simply how my mind works and remembers things. I pick up and understand more when terminology that is created for the world and mythos for a story is explained and defined in contextual situations. Not only does that help flesh out the world and define the parameters of the story for me, but having to flip to the front to refresh my memory as the story progresses interrupts the flow of the narrative and pulls me out of the story.

I also had some problems with some of the plot threads. There were too many questions posed either directly or indirectly that went unanswered, and the romance arc that had been strong from the start ended up going a little awry for me at the end. The world and the characters were a little too dark and foreign for my personal taste, and I thought the mythos was hard to follow - in part because of the problems I had with the terminology. The sexuality included in the book and the descriptions of Kin feeding pushed at my comfort levels a little, and the romance didn't offer enough of an HEA for me to balance out the emotional trauma the characters suffered throughout the book. I also never really felt Adam or Ean had matured into adults or had advanced beyond the development levels seen in the many flashbacks.

That probably sounds like a lot of negatives, but in all fairness I can't help but admit that for all of that, something about this book was genuinely captivating. Both the story and the characters have stuck with me days after I finished reading their tale. I wish a few things had been different, or had shaken out with a less grim existence for Lesser-Born and their food. I couldn't help but feel a bit hopeless about the Gray Zone and its inhabitants, the Kin and the Dens. That's just not a comfortable feeling to have at the end of my romance reads and it definitely affected my overall impression of this dark and edgy book.

Return from To Adam With Love to LGBT-M/M

Return from To Adam With Love to One Good Book Home