Too Wicked to Wed

A Debut with Several Good Points 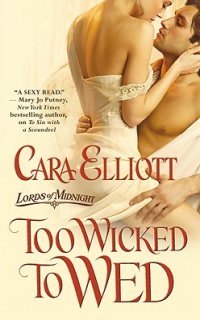 Disclosure:   An ARC of this book was provided to me by Forever publisher Grand Central Publishing via NetGalley. This rating, review, and all included thoughts and comments are my own.

Things aren't going so well for the Irish Wolfhound Connor Linsley. As the Earl of Killingworth, he is known as a gambler and a rake, but few know he owns The Wolf's Lair. It's positively unseemly for a man of his station to actually work for a living, after all, let alone own a notorious gaming hell and brothel. Still, it's been a lucrative business...until he's cheated at cards and his office is robbed. Suddenly, his pockets are dangerously light, and he's forced to reluctantly accept some financial assistance from a good friend, putting up half of The Lair as collateral for a loan. It's a decision that doesn't sit well with the independent Connor.

He should have listened to his gut.

Strangled by the constraints of society, the unconventional Lady Alexa Hendrie stirs trouble nearly everywhere she goes. Now she's in London for the season, and it's not exactly going well...not that she expected any different. In part to cheer herself up and in part because she's just that reckless, she accepts her cousin's radical suggestion for a night's entertainment. She dresses up as a man and, with her cousin's help, gets into a high stakes card game. And wins. It's the most fun she's had since she came to London.

It's also how a lady of her standing came to own half of a gaming hell and brothel known as The Wolf's Lair.

Linsley is incensed by his friend's actions, actions that have put half of his business into the hands of the lovely and oh-so-stubborn Lady Alexa. He has every intention of doing whatever is necessary to get it back, though every encounter with the blasted woman gets his temper throbbing as fast and hard as his pulse. Before he gets a chance to charm her into handing him back his business, though, he and Lady Alexa are attacked and he gets shot.

It's clear by that point that someone is out to bring down the Irish Wolfhound using the most heinous measures. Lady Alexa, unconventional woman that she is, has decided not to let them. Especially considering how alive she feels since meeting her rakish Earl.

Cara Elliott's Lords of Midnight series debut offers up a pleasant historical romance, but there were a few elements of the story and characters that kept it from being a totally solid read for me. Though strong female lead characters are always a preference of mine, and Alexa certainly fit the bill with her no nonsense air, quick mind, and country lass upbringing, I'm tired of the virginal almost-spinster type in the subgenre.

Actually, that's a part of a larger issue I have with historical romances. The character archetypes are so limited for female protagonists that it doesn't breed a lot of variety. Maybe that's a product of an attempt for historical accuracy, but it bothers me, none the less. In the case of this book, I was also a little surprised by the lack of surrounding family in Alexa's life. Other than the trouble-making cousin of hers at the beginning, readers don't actually see anyone - family, friend, or guardian, who is in any way close to Alexa or responsible for her safety, reputation, social season...nothing. That struck me as so odd for a young woman, even one who is feeling constrained by her social standing, that I ended up perplexed by the absence. We don't even hear from her brother, who is oft mentioned yet never seen.

And that brings up another issue I had with the book. Though it's marked as a series debut, it doesn't exactly read that way. The prologue was odd, and the mentions of the mysterious Seb and his new bride lent an air of previous story that I've missed. I can deal with that when I'm entering an existing series somewhere other than the beginning, but it bugs me in a book that's marked as the first.

Lord Killingworth was a nice enough male lead. I liked Connor. I don't know that I totally bought him as the Irish Wolfhound, though. For all his supposed reputation, he got shot and nearly ruined at various points in the book and didn't have many of his actions bear fruit. I liked him with Alexa, though. I wish the evolution of his feelings for her had been a little more clearly delineated, but their romance was the high point of the book for me and the two of them were quite nice together.

Story elements caused me some grief throughout the book. Connor owning the Wolf's Lair is supposed to be a big secret, if I understand correctly, but given that every character in the book knows he does, it didn't seem a very well kept secret. And the external conflict, the plot threads of the Bad Guy moving against Connor with increasing deadly intent wasn't woven together with as much detail necessary to seem a legitimate threat and a plausible crisis. The motives that are revealed, the impetus that stirred the pot and started it all, seemed...oddly anticlimactic and a bit disappointing. I was hoping for a more complex conspiracy.

And there's the rub. The heart of the matter. Overall none of the elements of the story or the characters who inhabit it struck me as particularly complex. Everything seemed fairly linear and too straightforward. The story was well written enough that the romance between Alexa and Connor had appeal, and I did truly enjoy their time at his family estate, but the beginning chapters seemed awkward to me, the final few chapters lost me once the antagonist's identity and motive was revealed, and the overall story lacked a level of complexity to really elevate this into a book I truly enjoyed. It was almost there. Just not quite.

Return to top of Too Wicked to Wed

Return from Too Wicked to Wed to OGBDA Book Review Home