Touch of the Angel

A Small Step Down in the Series 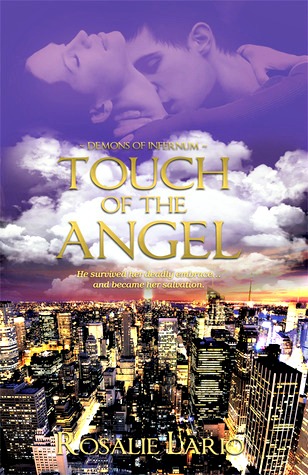 Disclosure:   An ARC of this book was provided to me by Entangled Publishing via NetGalley. This rating, review, and all included thoughts and comments are my own.

Ronin hasn't been sleeping well lately. He and his three brothers are concerned about the lack of work they've had. It isn't an issue of money. They are paid well for their jobs as interdimensional bounty hunters and they have savings. What concerns them all is the very real possibility that the Council could very well decide that they're not needed in this dimension any longer and send them back to Infernum.

That would not be okay.

The worry combined with his antsy restlessness is starting to make half demon, half angel Ronin Meyers a little nuts. That's the only reason Ronin can think of for being in a freaky place like the Otherworlder club Opiate at three in the morning, tossing back whiskey like it's mother's milk. Not his normal modus operandi in location or activity, to be sure. And then he looks across the crowded club and sees her, and suddenly Opiate doesn't seem like such a freak fest after all.

He should have just kept drinking.

Succubus Amara can tell Ronin is a genuinely decent male as soon as he sidles up to her and smiles. She enjoys their flirting, but has no intention of taking it any further. He doesn't deserve it. Her actions are no longer always under her control, though. An incubus is calling all the shots, and Amara is no more than his slave and his weapon. Problem is, he doesn't treat his property very well, and she's just so damn hungry...

Ronin is lucky to have survived his brush with the succubus, but hasn't been able to forget her since she almost killed him during a world-rocking round of sex. When the Council finally throws a new case to the brothers, he's practically thrilled at the chance to get out of his head a little with a fresh hunt. Then he's brought up short in shock when he slams into the fact that the succubus he can't stop thinking about is living in the house of the incubus he has been commanded to bring in.

From the beginning of this series, I've felt one of the most appealing aspects has been the threads of humor that were liberally sprinkled through the first two books, as well as the lighter tone of some elements of the plot. Strong, likable main characters also appealed. Unfortunately, I felt those were a little lacking for me in this book.

Lario doesn't tell a bad story. I've always liked the backgrounds and story surrounding the half demon brothers from different mothers, their bonds, and their bounty hunting ways. The books are quickly paced with plenty of action, and with a sexy thread of paranormal romance running alongside the external conflicts in every one. The sex is hot, the violence is bloody, and the characters are a bit wacky, a bit wild, and all sorts of charming (in their own weird way).

Ronin was less so to me here, though, which is a shame, because I was looking forward to seeing what his half angel side would bring to his own book. He wasn't as much fun as Taeg and I didn't find him to be as interesting as Keegan. He was okay. I didn't dislike him by any means. I just didn't feel much for him one way or the other.

Nor did Amara really rock my world. I've never been a fan of succubi in general as a paranormal species, and haven't yet come across any mythos unique enough or interesting enough to make me reevaluate that opinion. On top of that, I prefer strong female characters, and Amara's backstory and storyline put her more in the position of helpless victim than I'm comfortable with. She was nice enough, for a mass-murdering sex toy of death with a heart of gold, but she wasn't feisty enough, sassy enough, or bad-ass enough to hold her own.

The threat of the Bad Guy in this book and the plotlines surrounding him were, again, okay. None of the books in the series have been particularly strong on the plot-driven elements concerning the Big Bads, nor in the definition and clarity of the world building. I keep hoping to get a better idea of the Council, or see a Bad Guy developed that is as complex and layered a character as the brothers are, or whose motivations and actions create the multidimensional complexity in the story that I most enjoy.

What Lario writes isn't bad. It's not. And I haven't disliked any of it at all. It's just not setting itself apart or coming off as terribly gripping to me. I will say this, though, I felt a glimmer of all that when we meet Ronin's sister. Now that's a character I want to spend more time with. There's something about her that struck me as both wounded and unbreakable, and the duality peaked my interest.

This book wasn't my favorite in the series. I didn't like it as much as the first two. I didn't, though, dislike it. It was an okay paranormal romance set in an okay world featuring okay characters. My favorite parts included the main characters from the preceding books, and meeting Ronin's sister. The series has had potential from the very beginning. It hasn't quite reached that potential yet for me. I'm still hoping it will.

Return from Touch of the Angel to Paranormal Romance Genre

Return from Touch of the Angel to OGBDA Book Reviews Home