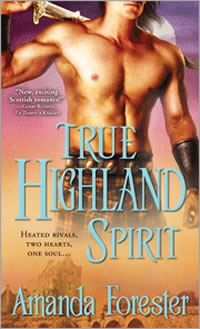 Sister of the Laird McNab, Morrigan McNab would do anything to support and protect her impoverished clan. Eschewing feminine trappings since she was a child, she straps on a sword...and other deadly accoutrements...and fights like a man. With her brother and a small group of their men, she raids other clans and ambushes travelers for additional coin and supplies. The dishonorable activity weighs her heart, but helping her clan survive makes that weight at least bearable.

Times are desperate, and when - in her brother's absence - she receives deadly orders from a man who holds the clan's future in his hand, she has little choice but to follow through. Conflicted and torn, her life on the line, she hesitates to complete the task, and in that moment of hesitation, comes face to face with a destiny far beyond that which she could ever have dreamed.

His life is cloaked in secret and ruled by obligation, his mission a many-headed serpent. Hospitaller Knight Sir Jacques Dragonet is in Scotland on a quest for a holy relic. As a cover for his clandestine activities, he's allied himself with a French Duke who is gathering Scottish warriors to join the war against the encroaching English. It is while Dragonet is traveling through the Highlands as a minstrel, gathering intelligence for the Duke, that his path first crosses Morrigan's. It won't be the last.

The intensity of his feelings for the fierce, proud woman is like nothing Dragonet has ever known. Staying away from her is unthinkable. Making her his, impossible. And when Morrigan finds out the truth about him and the full scope of his mission, the incomparable warrior woman could very well end him for his perfidy.

I wish I had known before I started this book that it's part of a series with two books preceding it. Not because it didn't read perfectly fine as a stand-alone novel. It did, aside from a couple of issues that may be related to previous books, but I'll get back to that. The reason I wish I had known that this is the the third book is that I would have loved to know if the main characters in those were as awesome and fun as they were in this one, and if the earlier books had the same enchanting and wry touches of humor so liberally laced throughout this one.

It's true...I'm a sucker for the humor. Especially the sort found on the pages of True Highland Spirit. It's self-effacing, unreserved, and unapologetic social and emotional awkwardness at its best. Perhaps it's not an out loud, guffaw-inducing kind, but it's set in the 14th century Scottish Highlands and there's a lot of serious stuff going on. Not exactly a comedic hot spot. Instead it's a quirky, warm, endearing humor that made me fall completely in love with Morrigan and her refreshing lack of all artifice and guile.

The story that surrounds the Highland warrior lass and the Frenchman who comes to love her is rich with historical tidbits tweaked around a layered and expansive plot. I enjoyed the feeling of authenticity in the historical setting, for while I'm no historian, nor terribly finicky about that sort of thing, there was an air of genuine history about the book that I enjoyed.

There were a lot of separate plot points and story elements, and quite a lot going on with and around the main characters at all times. Dragonet's quest, the political climate and subsequent battles against the English, the Abbot's corruption, the clan's struggles, and the growing relationship between Morrigan and Dragonet - all of that and more made for a lot to absorb. The pacing of the book occasionally bogged down for me because of the overload.

The beginning of the book started slow for me and included a rather odd six-month gap in which a large amount of ancillary development surrounding Morrigan's brothers took place. Once I learned this book is third in a series, I assumed those developments were featured in one of the previous books, but as I was reading, I found it all rather abrupt and jerky. I would have preferred a more streamlined narrative with a few less major plot points (never thought I'd say that) and a different starting point in the timeline to trim off some of the weight and smooth out some of the edges of it all.

Just so long as not one single word of any scene with Dragonet and Morrigan was touched. I lived for each and every moment they were together in the book. They were absolutely the best part of the read for me. And when Morrigan turned her hand towards seduction...inexperienced warrior-woman style, I had moments of sublime book-reading bliss. Loved it.

I adored them together. Not only is Morrigan possibly my new favorite historical romance heroine for every single one of her quirks, foibles, strengths, and sins, but the pair of them together just swept me away. Combining Morrigan's earthy, plain-spoken, kick-ass fighter, helpless-in-a-dress character with the delightful contradictions in Dragonet's own honorable, refined, knighted-warrior-with-the-monkish-innocence character was simply a brilliant, brilliant stroke of genius.

There isn't a thing I would change about them or about their interactions with each other. They were, for me, perfect.

This was a lovely read with a solid story and some truly spectacular moments that made me chuckle and grin. It's made me very interested in seeing what else Forester has created for historical romance fans. If there are more characters like Morrigan and Dragonet, and the humor is on par, I would say I've found a new favored author for Highland historical romance.