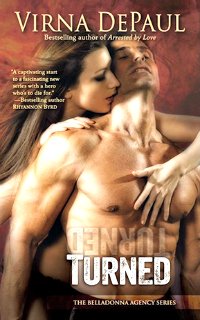 Disclosure:   An ARC of this book was provided to me by Bantam Dell publisher Random House Publishing Group via NetGalley.

Ty Duncan is a Special Agent with the FBI...on paper, anyway...but since being tortured and turned into a vampire against his will six months ago, he - and a small group of specialized agents - work for the covert group called the Belladonna Agency. Belladonna has a specific purpose: stop Rogue vampires at any cost.

To that end, Ty has been sent to Seattle to recruit a new Belladonna member. Seven years ago, Ana Martin was known as Eliana Garcia, street-wise gang member and a favorite of the gang leader. Those gang ties are why Balladonna needs her. They need access to a place run by Ana's former gang leader, a place that may be a front for a Rogue blood slave market.

Now all Ty has to do is convince a very wary Ana to return to the life she's worked so hard to forget while fighting a desire for the feisty woman that stirs all his darkest yearnings - for her body, her blood, and most dangerous of all, her heart.

I had a lot of problems with this series debut by DePaul. The world building is pretty sparse, and what few details are provided stick to the broadest of broad strokes. I would have liked to have had a clearer idea of just how long the FBI have known about vampires (the book says "years" but not how many), how they found out about them, how long before they gave up on the born vampires and decided on trusting Rogues for their turning program (which, as far as I'm concerned, puts the FBI fully in the TSTL category, because really - there was no way that was going to end any way but badly), how many recruits have been turned, and what roles those turned recruits had in the FBI.

Not that having answers to any of those questions would have improved my opinion of the FBI's callous disregard for life or their general idiocy, but it may have given me a better handle on the world and the reason for Belladonna's existence.

Its supposed purpose is to quietly clean up the Rogue problem so the FBI could get back to making their turned vamps. That never struck me as the noblest mission statement, given the FBI's duplicitous and suspect actions, but maybe a clearer picture of their history with vampires and their beneficial utilization of turned recruits would have helped.

And not for nothing, but it seemed odd to me that neither the FBI nor anyone in Belladonna seemed to know all that much about vampires. Not even Ty, who was one. I'd think that at least knowing how to kill one would be one of the first things the FBI would want to learn about deadly creatures they're stockpiling.

There were too many problems and troubling elements with the world, the vampires, the FBI, and Belladonna in general for my comfort, but one point in particular stripped away my ability to willingly suspend disbelief. According to the mythos, the act of turning a vampire is fatal to the maker. At face value that's not a problem, but when I thought about Ty's brutal turning and certain other story elements, that detail created way more trouble than it was worth, making several plot points seem highly implausible.

But my problems with the book extended beyond those weighty issues. As characters, I thought Ty and Ana were the strongest part of the book. I liked them both as individuals. Ty's issues with his vampirism and Ana's ties to her sister gave them each depth and helped shape their definition. Unfortunately, I wasn't nearly as fond of them together as a couple.

Their initial chemistry was strong, and I liked the level of heat between them, but as their relationship progressed it started to sputter under conflicts that were inconsistent and hard to follow. Some of that was a reflection of the two characters who were, themselves, inconsistent at times. I had a hard time figuring out exactly what was bothering each of them with the relationship, or determining from one chapter to the next which one was martyring themselves for the greater good. And when I was able to follow the twists, I didn't like what I found.

Ana, in particular, committed what I consider an ultimate sin for a romantic heroine. At one point she pushes Ty away in a completely unequivocal...and rather hurtful manner, completely repudiating any significance in their relationship, then gets all wounded and insecure when as a result, Ty pulls back and treats her strictly professionally. I hate that sort of hypocrisy.

Secondary and ancillary characters, like the other women recruited to Belladonna, had potential to add positives to the story, but they ended up getting little definition and had almost no impact on me one way or the other. They were just too underutilized. Though I do think the reason they were tapped for Belladonna, once revealed, was incredibly weak considering the importance of the jobs they have been recruited to do and the training that would be necessary to do it effectively without getting themselves killed.

Altogether, there were just too many things stacked against this book for me. Too many elements didn't appeal; too many questions left unanswered. Far too many things that just didn't make sense. As a series debut, it posed too many problems for me to feel any desire to follow the Belladonna Agency into the next book.

Excellent review. I hope the author appreciates how well you pointed out what bothered you in a professional and kind way. If I could write a low star review this well, I'd take the time to write more of them. I usually just don't do one. Sorry you didn't like this.

Thank you so much, Laura. I consider that the highest compliment. Writing a review of a book that didn't work for me is never fun and it's never easy, but I do try to keep in mind that regardless of my opinions of the end result, there was an unimaginable (to me) amount of work entailed in creating it. I always, always endeavor to respect that effort and I deeply appreciate the authors who work so hard to entertain us all.

Return from Turned to Paranormal Romance

Return from Turned to One Good Book Home