Neill and Merit Continue To Impress 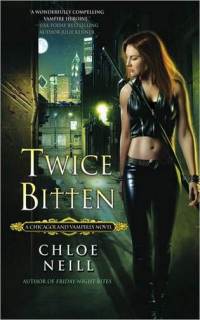 There are a plethora of kick-ass urban fantasy series with kick-ass heroines out there today. The genre is rockin' and sockin' like a frat house on a weekend bender after a football championship win. Every author has created a slightly different world, with slightly different mythos, slightly different characters, etc...the emphasis on slightly. That's not a criticism; it's more like a statistical probability. I believe the key is finding those authors and series that present a world or mythos or characters that appeal to your personal tastes. As urban fantasy is one of my favorite genres, and I have a very eclectic palate for it, I read a lot of UF series. Some set themselves apart, some don't. Few make it to my "Oh my god...new release?? Get it! Get it! Get it NOW!!" category.

Chloe Neill is, in my opinion, utterly unique in that she's created a series that, arguably, isn't the most original in location (the awesome city of Chicago) or in world building (vampires have come out of the coff...er...closet to humans and are working a wicked PR campaign to keep themselves from being turned into crispy critters and other supernaturals are eying them intently, concerned about the potential power shift and threat), or, honestly, in mythos (not really sure what the vampires' origins are, but they've had their fair share of genocidal cleansings that sound quite a lot like witch trials of old and of the inquisition), yet Neill has managed to catapult herself and her series into that category I mentioned. Yes, I actually have an "Oh my god...new release?? Get it! Get it! Get it NOW!!" category. I never said I was well balanced. Moving on...

What Chloe Neill has managed to create that is unique and appealing, is Merit, Sentinel of Cadogan House and kick-ass heroine of a kick-ass series. Bright, independent, stubborn, maturing Merit is one of my favorite UF heroines in any and every series I'm reading or have read. I absolutely love her. She's a novitiate vampire, new to the world and the House, and she's been forced into positions as both political pawn and weapon for her liege and master Ethan Sullivan, yet she remains relatively poised and strong willed as she grows within her House and her position as Sentinel. I am completely appreciative of a heroine that I can relate to and admire and, frankly, not want to strangle...because there are so many other UF heroines that I'd like to take a two-by-four to for so very many reasons, even when I like the series they're in (annnnd we're right back to the unbalanced issue...moving on). The Chicacoland Vampires series is told from Merit's perspective in a smooth, contemporary, first person narrative that is at turns humorous, griping, and caustic with sharp wit. Twice Bitten in particular shines with zippy dialogue and internal monologues, and Merit is almost solely responsible for that fantastic aspect of the book.

In Twice Bitten, which picks up mere days from the events of the second book in the series, Friday Night Bites, and just a few months from the first, Some Girls Bite, Merit is still dealing with the potential threat of Celina Desaulniers, former Navarre House Master and total power hungry wingnut, still training with Ethan, and still exceptionally drawn to him. The fireworks between them are incendiary and in this book, extra...fireworky...um, yeah. So anyway, the shapeshifters are on their way to Chicago for a convocation concerning their next move as a species and the Apex of NAC pack, Gabriel, is tentatively willing to extend a paw to Cadogan House and Ethan and Merit in particular. The foresight-gifted shifter has seen a future that includes pack and House affiliations he's not too specific about, but one that features Merit heavily. Ethan is practically salivating for the opportunity of an alliance because...well, because he's a politics junkie, for one, but he's also very aware that a war is brewing and the only hope of survival of both species against a planet of humanity may be joining forces with a past nemesis. Unfortunately, not all of the pack agrees with its progressive thinking Apex, and soon politics turns to bloodshed and death and assassination attempts. Will any tentative hope for an alliance go up in flames or will two races at odds be able to unite against a common threat? The cost for misstep will be paid in blood.

The political and sociological structures of shifters and vampires are brilliantly written here, and while the plot is both less an more than most end-of-the-world-or-some-other-similar-catastrophe UF series, it's fascinating and poignant, and there's a lesson to be learned about the crippling nature of bigotry and prejudice. This book (and series) is far more subtly written than others in the genre, allowing for some truly fantastic character development for a larger contingent of characters than most UF books. Through Merit's eyes we see how similar to humans in some ways, and how spectacular in others, vampires are as we get a deeper and broader view of the people and personalities that make up CadoganCadogan vampires in a more relaxed and natural setting, allowing a more intimate relationship with them as people, and I very much enjoyed that. I've grown quite fond of Lindsey and Luc and the rest of Merit's growing circle of friends.

I did have a few moments where I got a bit troubled with the plot, though. I can't say I totally bought into the motivations and actions of the players surrounding the main conflict and climax of the story. It seemed a little too neat and perhaps a bit cliched. Admittedly, I was more frustrated because the rest of the book had made a lot of excellent strides in laying groundwork for a positively Machiavellian development...though, I suppose I could be looking at it from a more vampiric perspective. That race does sort of epitomize Machiavellian. On the opposite end of the spectrum, there were also moments in the book that I felt attained a sort of sublime truthfulness, most notably with Merit and the guy in the library. There was a scene that pointed out in unapologetic detail that for some, atrocity isn't history - it's memory, and should be respected as such. Humans surely aren't immortal, but atrocity isn't limited to history, either, and the message was a poignant one that struck a chord with me.

As much as I hate to be one of those readers who clamors for more from a favored author, with pleas to write faster or produce more quickly, I have to admit, I'm less than thrilled that Neill is currently writing two books a year and one of them is for her Dark Elite series (Firespell (Dark Elite, Book 1)). Very unfortunately, that means no more Merit for another year. That's more than a little disappointing. Still, I have to say, Merit...and the Chicagoland Vampires series...is worth the wait.