Left Me In the Dark 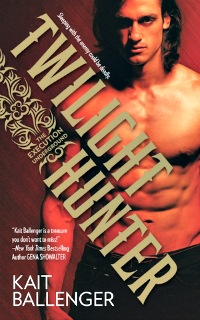 Disclosure:   An ARC of this book was provided to me by HQN Books publisher Harlequin via NetGalley.

When it comes to werewolves, no one hunts them better than Execution Underground operative Jace McCannon. He is relentless and unforgiving, a hunter with a fierce intensity and dedication to his job. Problem is, if the organization knew exactly why he was as proficient a hunter as he is, it would be Jace who would be hunted to extinction.

As it is, he's already in enough trouble with his boss. There's a vicious rogue werewolf on the loose and the carnage he's leaving in his wake is enough to make even a seasoned hunter like Jace shudder at what is done to the female victims. For three weeks he has tracked the frustratingly elusive fiend and time is running out - for Jace and for the monster's next victim.

The latest crime scene turns up his first big break, a werewolf crouched in the shadows watching him examine the fresh kill. If Jace were human, running a werewolf to ground would be impossible, but he isn't human. Not completely. He's half werewolf, and highly motivated to catch the monster who left another woman's brutalized body in a gutter.

Being chased by a hunter is not Frankie Amato's idea of a good time, especially when the hunter on her tail is so much faster and stronger than she expected. Cornered and forced to shift into her human form to plead her case, the pack alpha has no one to blame but herself when Jace takes her into custody. Now she's got to figure out a way to convince the hunter that she can help him track down the killer before she ends up as his throw rug.

As he's made no bones about his loathing of her kind, she has no idea how to do that exactly, but if she and Jace don't work together, more innocent women will die.

This book did not work for me at all. I liked the idea of it but the actual read gave me a lot of trouble. I pretty much hated Jace throughout the book. I found nothing even remotely heroic or noble about the man. He's an alcoholic, self-loathing prick who treats everyone around him like crap because of some deep-seeded daddy issues. I just wanted him to get the hell over it already and look at the bigger picture, but no.

He was also horribly inconsistent, especially when it came to the relationship he has with Frankie. It was as if he had a bad case of emotional ADD, wavering back and forth between disdaining everything about Frankie to getting all wounded when she holds back her feelings from him...often from one page to the next. And I have very little tolerance for lack of communication being the source of relationship conflict in my romance. Their relationship was littered with it.

Frankie wasn't as bad. I can't really say I liked her throughout, but at least she didn't make me mental. There were moments when I liked her, and I very much appreciated the fact that she's her pack's alpha, but I wish she had been a little stronger in both power and personality to better reflect that position. She was just a little too submissive to Jace, and too willing to take all the bad stuff he dished out at her and love him anyway, for me to take her seriously as an apex predator and competent leader of her people. Didn't help that my first impression of her included her running and hiding from her responsibility.

The story did have its good points, but I struggled there, as well. The world didn't seem all that fleshed out to me. The mythos surrounding skinwalkers was original in theory but I thought the backstory and explanation was an unclear muddle (and in reference to how a skinwalker transitions into a berserker, just flat-out disturbing in context). I also never felt I had a firm handle on the Extermination Underground itself, and given that the series is titled after the organization (so I assume it's important) that was a problem for me.

In fact, every time the EU or its members had impact in the story, there was little more offered than a poorly defined but explosive conflict between Jace and the local EU director Damon. That conflict was too all-encompassing to allow me to get a feel for any of the other characters or the organization as a whole. And I was sincerely disappointed that there was no resolution for their absurd and over-the-top dick-swinging contest.

That actually smacks at the core of my issues with the book, though. For all that the ideas were sound, the story as a whole seemed bereft of nuance and subtlety. If there was an emotion expressed, it was sweeping and dramatic, if there was an action taken, it was balls-to-the-wall, no holds barred. Conflict was furious and deadly, sex was intense and often angry, characters were tortured, romance was angsty. It was all just...so much noise that the sum total just struck me not as a tapestry of plot, character, and world, but as a brute force cacophony: chaotic, hard-hitting, and lacking sophistication.

I wouldn't say I'm sorry I read this one, but I also can't say I'd be interested in continuing the series.

Return from Twilight Hunter to One Good Book Home