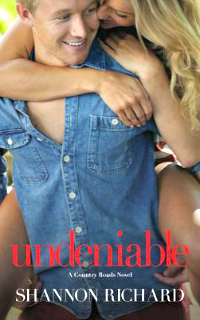 Small town baker Grace King has loved her big brother's best friend Jaxson Anderson since she was a kid. Problem is, Jax has always treated her like a younger sister, protective and caring. That's great and all, but Grace is no longer a child and her feelings for Jax are anything but immature. He's her one and only. He just doesn't know it. Yet.

As a sheriff in the small Gulf Coast town of Mirabelle, Florida, Jax Anderson sees a broad spectrum of the worst in human nature. It's nothing he hasn't seen before, though, considering his violently abusive, drunken father and utterly disinterested mother. If it weren't for the King family, he probably wouldn't have made it as far as he has. And that's why he's always known he's not good enough for his best friend's little sister, Grace, no matter that he can't remember a time when he didn't want her.

He was doing an admirable job of ignoring the want until that accident that almost cost her her life. Since then Jax has been struggling with his control, haunted by what-ifs. Surely that's the only reason he totally snaps his chain with the woman when she pushes his buttons, wrenching the last shred of control out of his hands with a maelstrom of passion. He still knows he doesn't deserve Grace. Still has no doubt she will realize that eventually and leave him. But maybe, just maybe, he can have a little grace in his life before she does.

I really enjoyed Richard's first book in this series, Undone, and I couldn't wait to get my hands on Jax and Grace's story. That's why it kills me to say that so many things went wrong for me in this one that Undeniable left me...well...undone. From the characters, who I found largely intolerable, to the story, which wavered between boring and extremely frustrating, to the writing, which made me a little nuts in several places, there were just too many things that pushed all the wrong buttons.

The long-suffering, self-sacrificing martyr character type never works for me, and Jax rode the, "We can't be together because I'm not good enough for you," horse until it keeled over dead. It was a refrain that popped up so many times I lost patience with him even before I reached the halfway point of the book.

Honestly, I could never figure out why he was so down on himself. Sure, he has a horrible set of parents and his childhood was traumatic, but only parts of it, because the King family and others took care of him and showed him what love was all about - a fact that is also stressed several times throughout the narrative. He's now a well respected member of the community, has good friends, a good life, and money enough in his pockets to buy his own home. So...not really seeing any real motivation for the I'm-no-good self image. It didn't endear me to him at all. Mostly I just wanted to kick him.

I wish I could say I liked Grace more, but I didn't. Her desperation for Jax and the subsequent heartbroken angst after every single time he pulled the push-me-pull-you act on her was very off-putting. And really, more than once would have been too much, but the number of times she went back to him in a blink after his demons reared their oft-seen heads and he treated her like Kleenex yet again was ridiculous.

Not for nothing, but any man alludes to me as a whore - in public no less - and I don't care how much I love him, he's not going to be climbing back into my bed with just a weak-ass apology. Not without missing a few of his favorite appendages first, anyways. The fact that Grace just accepted his apologies with very little confrontation every time and cozied right back up to the guy didn't make me think too highly of her level of self respect.

Had I liked the main characters more maybe I wouldn't have been so disappointed with the plot of the story, but I was bored through most of it. There were a couple of threads of interest, however. I liked Grace's friend Preston. He had a nice ancillary storyline that added poignancy to the read. I also liked seeing Paige and Brendan again. I love them.

On the other hand, the town biddy was up to her old tricks. I just wish someone would make her a victim of a tragic underwater basket-weaving accident or something, because that bat has to go. She's more than a source of conflict, she's an utterly reprehensible, barely human being and I can't for the life of me figure out why someone hasn't at least sued her for slander. The fact that her behavior continues unchecked is really rubbing me the wrong way. As do the town's bad apples, the trio of terror. They're so over the top ugly that I struggle to believe that their behavior has gone unchecked for so long.

There was an anemic mystery thread surrounding a rash of robberies in town that could have been better developed and incorporated into the storyline, as well. It wasn't a bad idea, but as it was written, it just seemed contrived to put the characters in the position they were in at the climax of the book, and that bothered me. For that matter, I couldn't figure out why what happened in the climax suddenly wakes Jax up when what happened at the end of the previous book didn't seem to.

I wasn't thrilled with the narrative itself, either. It was over-burdened by way too much superfluous information and description. It seemed at times that every single element of a scene was described in minute and unnecessary detail and every ancillary character who was given so much as a mention had their life story and connection to the town detailed to the extreme. And there are a lot of characters mentioned. After a while it all became white noise, and it drowned out the stuff that could have really added to the narrative and the storyline.

There are just too many things about this book that either fell short or didn't work for me. I really enjoyed the first book, so I'm hoping that this was just not a good fit for my reading preferences. I'm not ready to give up on this series just yet. There's obviously something brewing between Grace's friend Mel and Jax's friend Bennett, who caught my eye in the first book. I'm sincerely hoping, though, that Bennett acquits himself better than Jax did here.

Return from Undone to Contemporary Romance

Return from Undone to One Good Book Home