Couldn't Quite Connect to This One 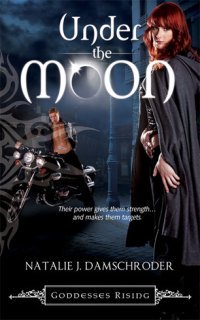 Moon Goddess Quinn Caldwell is feeling the strain of managing her bar and doing her goddess consultations while holding off on using her very willing best friend Sam to enhance her power. He's in love with her, and as much as she loves him, she just can't return his feelings. Her heart is otherwise occupied on her own hopeless love interest. Still, having sex with Sam during the full moon just doesn't seem right any more. It's holding him back from finding real love.

The conflict between them has made work difficult, though, and the strain of tension between her and her best friend is stressing her out. So much so that Quinn would relish any distraction. She should have been more specific.

When Nick Garret, her official goddess protector and unrequited love interest, calls her with an ominous...and unexplained warning, then shows up at her bar before his normal guarding rotation, Quinn is concerned. That concern turns to shock and alarm when he tells her that goddesses are being attacked and drained of their power and she may be a target.

She tries to contact the Society for Goddess Education and Defense, the ancient society she serves as a board member, for answers and guidance, but she is shut out by the very organization that she has served so faithfully. Then a rumor of Nick going rogue starts swirling around, along with rumors of some mysterious family connection between Quinn and the perpetrator of the crimes against goddesses.

Her life is caught up in a confusing, scary maelstrom of suspicion and fear, and soon she and Nick and Sam are racing across country, investigating the source of the danger and rumors as Quinn tries to stay a step ahead of a power-hungry madman. What she will find at the end of their journey will either change everything in her life...or end it.

Being hit with all of that so early into this book made me feel like I had picked up a more fully fleshed out and heavily edited version of a story I've already read. Fortunately, the similarities pretty much ended there.

I have to admit, the concept for this story is original, and the world Damschroder created was obviously well thought out and clearly conceived. I didn't get the sort of detailed definition of that world that I needed to make it real to me, though. The focus of the book stayed tight on the main character and those secondary characters surrounding her, not leaving much room for world view.

The characters were another issue. They were okay, but something about the story kept me from feeling connected to them. Part of the problem could very well be that I was expecting more romance. I thought it was a paranormal romance when I started reading it, but it reads more like an urban fantasy - or, because of the relationships involved, a paranormal romantic suspense, but the romance was almost ancillary to the story. It was more like Quinn and Nick rotated around each other instead of a romance between them evolving alongside the other story threads.

The reader knows Quinn has loved Nick for years, but Nick's feelings are questionable to both Quinn and the reader throughout most of the book. Their relationship doesn't actually start to change from friendship and protection until late into the story. That prevented the romance elements from satisfactorily translating to me as a reader, and the romantic climax lacked much of a punch because of it.

I liked the concept of the Big Bad in the book, but my enjoyment was tempered by the haphazard investigation by Quinn, Nick, and Sam. I was also never clear on why they would be the only ones really doing any serious investigating, given the world and the organizations connected to the matter. Especially given the lack of significant connection to the victims.

A couple of goddesses Quinn was moderately friendly with are attacked and Quinn gets treated weird by the organiztion she belongs to, so she abandons her work and throws herself into stopping a power-hungry madman. There just didn't seem to be enough motivation on Quinn's part for the massive effort she expended given the seeming ambivalence of everyone else.

And while the trio were driving across the country, trying to stay away from a threat they weren't even sure was targeting them, the story dragged. I felt like I was spending too much time with three fairly average characters as they wandered around, failing to gather much pertinent information. Add to that a habit of jumping to conclusions and getting into trouble before dashing off to trace the next clue.

It's not a bad read, though. I didn't dislike the story and I don't mean to sound like I did. Damschroder created a world with an interesting mythos and a conflict that was a serious threat to the characters, then she set it all in motion with sheer force of will. It just didn't do it for me, through a combination of false expectation, reading preference, and story issues. Too many questions went unanswered (how the heck did he get her sock?), too many coincidences to be believed (Sam's roommate, really?), too many things lacking emotional impact impact. This one was just okay for me because of all of it.

Return from Under the Moon to Urban Fantasy Genre

Return from Under the Moon to OGBDA Book Reviews Home