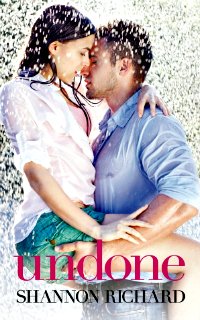 Paige Morrison hasn't had the best day...er...well, week...no, it's more like...oh, hell. The past year of her life has pretty much sucked.

She lost her job with an advertising agency in Philadelphia, lost her roommate (and best friend) to a swank job in DC, lost her apartment because she couldn't make the rent alone, temporarily moved in with her boyfriend until she got back on her feet, then got dumped before she got the chance. Forced to leave Philly just to survive, she ended up at her parents' home in the small town of Mirabelle, FL, where for the past three months she's found nothing but closed, prejudiced minds and tightly sealed doors, so no job and no friends there either.

Then, to add insult to the injury of a particularly humiliating interview with the town's resident gossipy, venomous hag, her Jeep dies, stranding her on the side of a very hot, very dusty road to nowhere. Yeah, she's definitely had better years.

Hey, at least her mechanic is hot.

Brendan King has heard of Paige Morrison. Everyone has. He's even seen her jogging around town a few times. Her call for a tow, though, is the first chance he has to see her up close or talk to her. Turns out that's probably a good thing, seeing as how just five minutes with the gorgeous, smart-mouthed, quick-witted, and so obviously down-on-her-luck woman completely rocks Brendan's world to the point where he doesn't know if he'll ever recover. Or if he even wants to.

She's the best thing he's ever had happen to his life, but Paige is a city girl, and Brendan is right where he belongs in the small town of Mirabelle. The problem may not be so much getting the girl as it is keeping her, but some risks the heart just has to take.

I have a few confessions to make. First, I absolutely love romances that have a guy so totally gone over a girl that he's endearingly goofy with it. It's totally sappy of me, I know, and I'm probably ruining my tough-girl cred (I have tough-girl cred...really...I swear. Oh, hush.) but for some reason that sort of over-the-moon-for-a-girl guy just really pushes my Happy Reader buttons, and Brendan was exactly such a guy from the moment he meets Paige. I loved it. I loved him.

I also have to confess that sometimes, just sometimes, no other sort of book will do for me but a light, fluffy, relatively complications-free romance. They're the cotton candy of what I refer to as brain candy reads; airy, not a lot of substance, really, but still so damn sweet and tasty. When I started this book, that type of cotton candy romance was exactly what I needed to cleanse my mental palate after several weightier, less happy reads. For most of this book, I was in reader heaven.

Brendan was by far my favorite character, but I liked Paige, too. Their romance was the sort of cute, fun, slow-buildup (relatively), almost idyllic romantic tale that doesn't come around all that often any more. There was sex, but not before they had been seeing each other for months, and the arc of their romance stretched all the way through a wedding and beyond. Definitely not something you read every day.

While the narrative lacked a measure of sophistication in a lot of ways and the writing style, most notably in the descriptive passages, sometimes read like bullet points, there was plenty of southern small-town goodness to balance it out. There was also a nice number of secondary characters with tons of personality if not definition, and the setup for the next book in the series, Jax and Grace's book, was well done.

The plot wasn't complex. External conflicts were mostly annoyances and relationship conflicts were few and far between. Personal conflicts and emotional baggage didn't come into play all that often, either, even when it would have been more realistic if they had. Occasionally that made the romance arc feel a little saccharine and made the book seem a little long, especially as I reached the last quarter of the story. I also had some minor issues with the timeline, which starts out with a nice day-to-day pace but has some awkward transitions when the timeline starts jumping forward by months. Nothing too bad, but enough to notice and pull me out of the story a bit.

To be honest, a staple diet of this sort of romance would drive me a little batty, but in small doses, it's just what my reading doctor ordered. For me it was a feel good, guilt-free pleasure read with a totally adorable romantic hero and an eminently likable heroine. It was also my first read of a Shannon Richard book, but given how I'm dying to get my hands on Jax and Grace's story, I can pretty much say with certainty it won't be my last. After all, a girl's gotta have just a little bit of cotton candy every once in awhile.

Return from Undone to Contemporary Romance

Return from Undone to One Good Book Home