Out of This World...And About Three Others 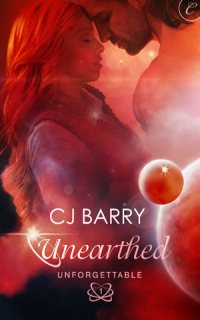 Tess MacKenzie isn't having a good night. She's just got paid for her last gig, much needed funds for those pesky necessities like rent and electricity, and she's walking to her car late at night. Alone.

Okay, so maybe that's not the wisest course of action she's ever taken, that fact made painfully clear when a mugger steps out of the shadows and demands her cash. There's no way she's going to just calmly hand over her hard-earned money, but she doesn't want to die, either. That's about when Tess has one of those good news/bad news sorts of experiences. The good news is that a tall, dark, and stunningly gorgeous stranger steps in to help. The bad news is he's not alone. He's got a floating, vaguely humanoid robot-looking thing with him, one that knocks out the mugger (good news) and then does the same to her (bad news).

Space adventurer Cohl Travers is pressed for time and deeply concerned. His father has been taken hostage and is being held for leverage in a war between two warring factions of a nearby planet. Those who have his father want Cohl to obtain an ancient artifact that will give them the ability to win their civil war. The other side will do anything to stop him. And in the middle of it all is the one-in-a-trillion voice of Tess MacKenzie, key to nullifying the deadly trap that would make any attempt to retrieve the artifact completely fatal without her.

He hadn't given much thought to kidnapping Tess. It was just what he had to do. He also hadn't expected her to be so alluring, to stir the heat in him until he was ready to consume her. Problem is, she's not at all happy with her new accommodations and loathe to help him do anything but suffer for his crime.

Yanked away from her dreams, from everything she's worked towards for the past eight years, from her own planet, Tess has no intention of playing any part in Cohl's schemes, regardless of how hot he is. At least at first. But the longer she knows Cohl and the more she learns about the ramifications of what's at stake, the more the thought of going home starts to seem the greater sacrifice resulting in the larger loss.

I'm starting to panic here. I've been trying to write this review for two days. Two long days of staring at a blinking line on my monitor. A blinking line that has been surprisingly resistant to flowing across the screen with its usual alacrity as reasonably intelligent words (don't burst my bubble here, man) encapsulating a relatively experienced opinion (let me have my delusions) magically appear. Writer's block? For a review?? That's a particularly horrifying thought for someone who started reviewing books because of a physical condition marked by much higher-than-normal levels of opinion in her blood.

Part of my problem, I think, is my discomforting lack of experience with the genre. I don't read a lot of SciFi. Almost none, actually. Which, I suppose, is a little weird for a SciFi fan. And I am a huge SciFi fan from way back. Yeah, farther back than I'm ever going to admit, and lets just leave it at that. Thing is, my appreciation for SciFi is based more firmly in the visual media markets. That's basically a totally pretentious way of saying I prefer watching it to reading it. Give me a SciFi movie or TV show and I'm there. Books, not so much.

And frankly, I'm leery of expressing opinions on issues, books, or fiction genres that I'm unfamiliar with. So that's part of my problem. But only part, because I recently reviewed a steampunk holiday anthology, my first experience with steampunk, and I didn't have a problem with that review. I just admitted that my opinions weren't based on my wide experience with the sub-genre and went from there. So my limited experience with SciFi can't be the only reason this review has been so...resistant to being written.

It can't be that the opinion of the book is difficult to express. I've expressed just about every sort of opinion there is in my reviews over the years. The good, the bad, and the ugly have been put out there in overly-verbose reviews that have rolled off my fingers. That's never been a problem for me at all.

But I've been sitting here for two days now (no, not continually - sheesh - I took bathroom breaks), trying to put the words together that successfully express that I really enjoyed this story, thought it was well written, and felt the characters had some great chemistry together. I've been trying to explain that there were elements that struck me as a little silly, or at least purposely lighter in tone than I would have preferred, but that I really liked the action and adventure scenes, and the romance worked for me. So did the characters. And I've struggled for a way to get out that my two main problems with the book were the basic story premise and Tess's initial reactions to her kidnapping.

I did have some trouble with the basic story concept, and that threw a rock at my ability to easily engage my willing suspension of disbelief. I just thought the combination of there being one voice in all the universe that could do what Cohl needed it to do, the voice belonging to a woman from Earth with a barely-there music career, and the fact that Cohl heard that one voice when at least one of the many alien satellites monitoring the human race in orbit over the planet caught it and sent it to him, was just a little hard to easily accept as remotely possible, even within the framework of science fiction. It took me awhile to engage with the story as a result. That issue was compounded by how quickly Tess got over the massive paradigm shift that came with being kidnapped and waking up in space surrounded by aliens and a sentient robot. I would've more readily believed some nearly catatonic freak out or at the very least a bit more gain time before her libido kicked in and she felt groiny urges for the head alien who kidnapped her, regardless of how hot he is.

But hey, I finally accepted that it is what it is, and the rest of the story went fine after that.

Two days and the words haven't come, no matter how hard I've tried, no matter how long I've stared at the screen. Tantalizingly close, but frustratingly uncompromising. I can't sit here any longer. I just can't. My butt's sore, my back's hurting, and I'm a little hungry. So I'm just going to have to leave it at this: I liked the story, but the premise it's based on was pretty shaky for me and Tess' initial reactions to space didn't seem believable. Other than that, it's a fun read, and I'm looking forward to trying out the next book in the series. After two days, that's just gotta be enough said.

Return to top of Unearthed by C.J. Barry