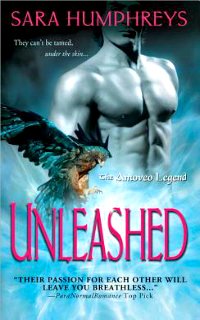 Aspiring artist Samantha Logan gave New York City her best shot, but she knew when it was time to pull up stakes and return to her Nonie and her childhood home on the coast of Rhode Island. It isn't just the apparent lack of interest in her art, though, that prodded her to pull up stakes. There are also the dreams...

She dreams of a man who touches her like he knows her, who feels like he belongs to her, and who is telling her it's time to come home.

Malcolm Drew is already suffering from his lack of a mate, a curse for his kind that first limits their power and abilities, then kills them if they don't bond with the other half of their soul. Finding his Samantha in the dream realm fills him with such anticipation and need that he reels with it. He knows she's coming back to the home in which she was raised, and he is anxious to see her in flesh, to court her, and to have her.

Not that he's entirely certain on how to go about doing the courting part. Samantha is a rare and unique woman. Her mother was human, her father one of Malcom's kind, the Amoveo, shapeshifters with a rich clan-like history and special abilities. His problem, Samanatha has no knowledge of her heritage. She was raised by her grandmother in the human world after the death of her parents when she was just a child. Malcolm has never been with a human woman before, or even one raised as human. He has so much to teach her, so much to tell her, and so little time to woo her. But the stakes have never been higher.

A half-breed is virtually unheard of for his people, but she may be the key to their very survival as their existence teeters on a razor-thin wire. Their numbers are dangerously low and mates are growing increasingly harder to find. Being able to mate with humans of special abilities may save their race from extinction.

He will do whatever it takes to have her, to love her, to cherish her, and to keep her safe from the human hunters who stalk his kind and have killed so very many of his kin. Including Sam's own parents.

I wanted to love this book. I really did. Paranormal romance is my reading bread and butter, my favorite romance subgenre. Problem is, Unleashed didn't bring anything new to the table, and what it did bring trod such a well-worn road that the ruts are chasms by now. Everything from the Amoveo's history, to their special abilities beyond shape-shifting into their spirit animal, to their need for mates, to the bond between mates being mystical in nature, to their threatened extinction, to their mortal enemies being a human family intent on wiping them from the earth - just about all of it has been done so many times it's rote.

But here's the catch: it wouldn't be rote if it wasn't such a profitable and commercially appealing formula. See, my problem isn't that the elements of the world being introduced here are so common, paranormal romance wouldn't be my favorite subgenre if that was the case. It's that the commonality was ponderously evident because nothing else about the read was otherwise noteworthy to me.

The characters were okay. Malcolm had that urbane otherwordliness going for him. Personally, I think the author missed an opportunity by not making his attempts at romancing a human more adorably inept to add some levity to it all, but how an author chooses to write her books is her decision. For my tastes, though, Malcolm didn't wow me with his appeal, and he was less alpha male than I like my lead heroes to be. He was...fine, I guess. Nothing about him bothered me, but nothing about him really cranked my engines, either.

Sam was more of a problem, but again, that's a very common issue I have with female leads in paranormal romance. She was a bit too much of a victim, had too many moments of stupidity, or at least thoughtlessness, and wasn't too good at looking around and really seeing the world around her. On a far more positive note, her character did evolve into a far more palatable heroine by the end, but it was a rocky journey.

As a romantic pair, I felt they were, again, okay. They had some chemistry, both physically and emotionally, but it was hampered by how late in the book Sam is brought into awareness of her heritage and identity. Between the ex-boyfriend bully and the stalking predator after her and Malcolm, there were plenty of opportunities for increasing tension and heightening emotion that went unrealized or were underutilized simply because Sam didn't know about it.

The book did have some bright spots, things that added appeal to the read. Some of the secondary characters added a nice bit of color to the tale, especially Sam's best friend and her art dealer. There were also a couple of other Amoveos who peaked my interest. One aspect of the book even gave me hope for subsequent novels.

Despite the fairly predictable and lackluster plot throughout most of the book, the ending had a few twists I really appreciated, hinting at the positive potential for the series as a whole. Once Sam embraced her abilities, once nefarious plots were revealed and secrets uncovered, I was able to smile a bit more about the whole of it. The best parts of the book, for me, were the final few chapters. There was still the patina of familiarity, but the other elements came together in such a way that the patina felt more comfortable than confining.

It's always a good thing when a book ends on a high note. Being the last thing a reader remembers, it goes a long way in making up for what precedes it. Unleashed really needed to knock it out of the park to balance out the lack of sophistication in the narrative, which tended towards repetition in places, the pedestrian worldbuilding and plot, and the prosaic main characters. While I can't say I felt it entirely accomplished that particular goal, it did manage to get on base. There was at least enough there for me to be willing to see how the second book in the series plays out.

Hi there-Thank you for taking the time to read and review Unleashed. I hope you'll check out Untouched when it's released in April.
All the Best,
Sara

Sara, Thank you for your comment, and for visiting OGBDA. I appreciate everyone who stops by to comment on my reviews, but I especially respect and admire authors who graciously comment on a review that was not enthusiastically positive.

I WILL be checking out Untouched, and have much interest in the main characters in that book. I wish you nothing but success with its release and the series as a whole. 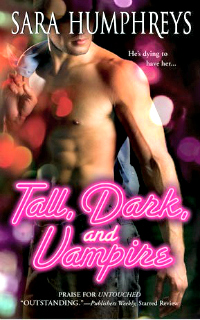 Return from Unleashed to Paranormal Romance

Return from Unleashed to One Good Book Home