Definitely Hot Under - And Around The Collar After Unleashing 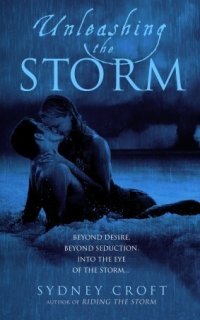 I almost didn't. In fact, I'd deleted the free preview I'd downloaded to my Kindle after months of wavering back and forth as to whether I was going to continue the ACRO series by Sydney Croft (writing duo Larissa Ione and Stephanie Tyler). As much as I thoroughly enjoy Larissa Ione's Demonica Series (Pleasure Unbound, Desire Unchained, Passion Unleashed, Ecstasy Unveiled, and the soon-to-be-released Sin Undone), to say I was disappointed in Riding the Storm would be an understatement. I disliked it so much, in fact, on every front - from the scattered and confused plot to main characters I didn't like to a romance that was two dimensional at best - that even the sexuality of the book didn't redeem it for me. So I almost didn't.

Then, after seeing the rating and reading the reviews...and honestly, being bored with some of my latest reads...I did. I downloaded Unleashing the Storm and decided to give the writing duo that is Sydney Croft another chance. And for about the first 25-30% of the book, I was regretting that choice, because I had that same sense of surreal disassociation I had when reading the first in the ACRO series - that sense that I'd been dropped down in the middle of three different stories after missing all the exposition before it. The only thing that kept me reading was that in this case, I actually sort of liked Tom "Ender" Knight from the beginning, and that grew until I was very fond of him, and I liked Kira Donovan very much all the way through.

Then the story picked up...or smoothed out or something...and I was onboard for the ride. My favorite part of this book was the journey of Tom and Kira, but I enjoyed the threads with Annika and Creed (one of the only parts I liked about the first book, too) and the threads with Dev were okay. All in all, there was an increased complexity to the ACRO world and the different plot lines that intersect in this book, and I didn't feel quite as lost as I did in the first book as more was explained. Bottom line, though, I just never warmed up to the Remy/Haley pairing in book one of the series, and I never HAD to warm up to Tom/Kira - they were hot from the start. 3.5 Stars overall, and I WILL be continuing to Seduced by the Storm (ACRO, Book 3).

Return from Unleashing the Storm to Paranormal Romance Genre

Return from Unleashing the Storm to OGBDA Book Review Home