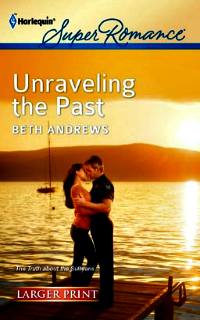 Disclosure:   An ARC of this book was provided to me by Harlequin via NetGalley.

It's bad enough Captain Layne Sullivan didn't get the Chief of Police job she thought she deserved, now she's forced to work for the by-the-book Chief Ross Taylor, town new guy and general bane of her existence. When human remains are found in the woods near the site of a teen hangout, though, Layne's issues with Taylor start to lose their significance in the shadow of her growing concern. And panic.

Layne thinks she may know the identity of the person whose remains were found, but if she's right, the ramifications will rewrite everything she thought she knew about herself, her family, and her past. To find out the truth, she'll have to depend on Taylor to get to the bottom of a case that went cold long, long years ago. A case that forced her to grow up before her time. A case that scarred her soul.

Expectations are such a killer sometimes. But only sometimes. On one hand, I wasn't expecting a Harlequin Super Romance to have such a solid and meaty suspense thread, nor was I expecting the secondary character depth or complex familial relationships that Andrews created and spun so deftly and realistically. Those were all pleasant surprises. On the other hand, I was expecting a...well...super romance, and unfortunately the romance is the one and only major element that didn't work for me.

My issue with the romance started with Layne as the main character. She's strong, and certainly an independent, competent woman, and she's supposed to be a good enough cop to be at least considered for the Chief's job. Unfortunately, I felt some of her choices, thoughts, and actions were more than just a little flawed. Her personality often struck me as churlish, petulant, and bitchy, and at least some of her actions were flat-out against the very laws she's sworn to uphold.

Though significant issues, thankfully none were consistent drawbacks throughout the narrative, which would have made her character fairly unlikable. It was just enough to create dissonance in the romance for me, though, and make me wonder sometimes why Taylor was so taken with the woman. Because of that, and no matter how much I liked Taylor as a character, which was quite a lot actually, the romance just never got off the ground for me.

I loved the struggle between Taylor and his niece. I found her character particularly well written in that horrifying teen-angst-and-turbulent-emotion sort of way. She was a beast, and she was so horribly wounded, and Andrews did a great job with the highs and lows of that familial relationship. She captured perfectly that quagmire of volatile emotions that family can engender in each other. And in defense of Layne, Andrews also captured much of the long-term emotional devastation that can be caused by the wounds family inflict on each other.

If this book had been marketed as a romantic suspense, I probably would have been more forgiving of the issues I had with the evolving relationship between the main characters. Then again, maybe I wouldn't have been as pleasantly surprised by the suspense storyline in that case. Regardless, this one just wasn't quite as satisfying as a romance, and that did impact my overall impression of the read.

Welcome back! You have been missed!

Your words mean the absolute world to me. Thank you SO much!

Nice review! I've missed seeing this one around, so I'll have to see about getting it on my list. Looking forward to find out more about this book!

Thanks! I hope you have a chance to read it!

Return from Unraveling the Past to Romantic Suspense

Return from Unraveling the Past to OGBDA Book Reviews Home