Until There Was You 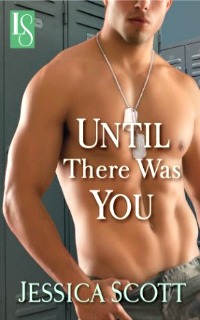 It started with a kiss. Claire Montoya is a woman who fought her way out of a hardscrabble life and kept right on fighting through her enlistment and into a commission. She's a woman who follows only those rules she deems valid. Evan Loehr is a West Point grad, a by-the-book poster boy for the elite military man. He lives for and by all the rules, no questions, no evasions.

From the moment they kissed they knew, absolutely knew, how incendiary their attraction was. And how completely unsuited they were for each other.

Their professional relationship has grown more and more contentious as the years passed. Claire and Evan do not get along. Neither has forgotten that one moment of passion three years ago, but now that they're working together, they can't afford to dwell on it. It's a pity that knowing that and living it are two very different things.

Colorado in winter is Claire's version of hell, but dealing with Army bureaucracy while trying to train a company for Iraqi deployment is definitely one of the lower levels. Nothing about the Army's focus for this training session makes sense to Claire, and nothing she says or does sways Evan in the least. It's enough to drive her out of her mind. It's enough to scare her senseless, too, because poorly trained soldiers are dead soldiers.

If Claire takes matters into her own hands, she'll be forced to wage a personal war on the one man in all of Colorado who could keep her warm during the snowy nights, because for all his many, many...many faults, the fact is that Captain Evan Loehr is both a hell of a soldier and a hell of a man. She's left with no good options and a troubling bottom line: if she risks her career she could potentially save lives, but she'll definitely lose her heart.

I'm so confused. It's been a few months since I read series (and Scott's authorial) debut, Because of You, but I haven't forgotten that the expectations and assumptions I'd made about that book prior to reading it affected my impression of it. It was a much weightier, emotionally intense read than I was expecting, so I prepared myself for this one. Expected angst. Had tissues standing by. I was ready.

Yeah, well, Scott threw me again. This time, though, I feel a little lost. On the bright side, I liked the characters well enough, and I was much fonder of Evan than I was of Shane in the first book. There wasn't an overload of angsty emotional landmines in the characters' personal lives or relationship, either. Some might consider that a bad thing, but I was happy about it. The first book was just too heavy for me, especially as I was expecting a sexy, light read (the cover of that book did me no favors in that regard).

Problem is, for all that I liked the characters in this book, they weren't the characters I was expecting, nor was the storyline what I'd thought it was going to be. The first book left several plot threads dangling and posed a very grim glimpse into the lives of two secondary characters whose marriage was crumbling. At the conclusion of that book, I figured that was going to be a storyline that was carried over to serve as a cohesive element in the series.

I was wrong, because unless I'm mistaken or have forgotten something, there was not one single character crossover between book one and two and no story threads that were picked up and continued from there into this one. There was, however, an opening sequence that was startlingly similar to the beginning of the previous book, and not in a good way. Small details were changed, but the entire dynamic was far too similar and put this book on a shaky foundation for me from the start.

You will get no argument from me about the fact that Scott can write. She paints a cohesive, detailed picture of military life that is intriguing and disturbing at turns, and as often frustrating and perplexing as humbling and amazing. The psychology of career military personnel is captured perfectly as her stories unfold. The Army itself is portrayed as having a few...idiosyncrasies that are completely realistic and utterly believable. And more than a little scary.

I do wish there had been less emphasis placed on the scheduling snafu as the main conflict in this book. I absolutely believe it's an accurate representation of similar real-life situations, but it was belabored throughout the first half of the book to the point that character discussion and arguments over the issue became repetitive, and as a main plot conflict I felt it lacked complexity and depth.

The issue with Claire's best friend's alcoholism was also emphasized a little too much for me. Initially I was bothered because the character seemed a little too similar to a secondary character in the first book, but as his drinking problem became a larger issue, that became less of a point. It astounded me that so little was done to address what was a massive problem, especially for a soldier facing time in the sandbox. So many rules were broken to protect him that I couldn't fathom the "friendship" justification.

Not only was his character hugely unsympathetic to me through most of the book, but more troubling was my dissatisfaction with Claire's hypocritical reactions to his alcohol abuse. I would think that a man that messed up is no less deadly to himself and surrounding soldiers than one who is poorly trained. It didn't speak well of her character that she hadn't addressed that fact at any point.

As far as romantic arcs go, the one between Claire and Evan was handled well. It felt more like what I consider a traditional romance than the arc in the previous book. Sometimes Claire's prickly personality annoyed me, and sometimes Evan's frustratingly rigid stance made me want to kick his shin, but overall, their relationship was satisfying, sexy, and entertaining. It was probably the highlight of the read for me.

I don't know what to make of this series at this point. I'm disappointed that the threads left dangling in the first book weren't picked up, and because they weren't, I don't know that they ever will be. That cast a pall over both reads for me. If the series continues along with each book as disconnected as the first two, and the emotional tone of the series continues to vacillate so wildly with such unpredictability, then it won't matter how pleasant the main characters' romance is or how realistic the portrayal of military life, I will be disinclined to soldier along with it.

Return from Until There Was You to Contemporary Romance

Return from Until There Was You to OGBDA Book Reviews Home