Upon a Mystic Tide

Not as Magical as the First 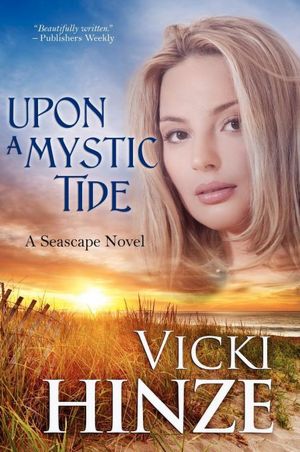 Disclosure:   An ARC of this book was provided to me by Bell Bridge Books via NetGalley. This rating, review, and all included thoughts and comments are my own.

Dr. Bess Cameron is an excellent psychologist, counseling those who call in to her radio show on all matters of the heart. It's a career that fulfills her. One in which she excels.

Of course, if the station owner or her listening audience had any idea that she was in the middle of an acrimonious divorce and had been separated from her husband for years, she'd be out of a job. But that is a very closely held secret. Or it was, until a complete stranger calls and reveals that secret on air, throwing Bess' life into even greater turmoil.

She doesn't know who Tony is, or how he got his information, but she's completely shaken. She turns to a couple of good friends for support and ends up standing in their art gallery, staring at a painting that touches something deep inside her. It calls to her, drawing her to Maine and the Seascape B&B. She has no idea why she's so certain, but she's absolutely positive that she will find a precious sliver of peace there.

Private investigator John Mystic still loves his wife, knows he failed her as a husband just as he failed a dear friend as an investigator. He refuses to divorce Bess, though, until she agrees to take alimony, and she's being unreasonable on the matter. Now that news of the divorce has been made public, he's even more determined to make sure she's taken care of, no matter what it takes.

If he has to follow her to Maine and camp out at Seascape with her until she agrees to his terms, so be it. He just wasn't quite as prepared for dealing with a meddling ghost named Tony.

While the first book in this trilogy totally blew me away and appealed to me on many levels, I struggled with this second installment. Part of the problem is my own fault. I was pleasantly surprised and unprepared for the mystical elements and fabulous romance in the first, but I was expecting them in this one, and they just didn't live up to the expectation.

I was wise to Tony's story and his influence at Seascape, so that influence wasn't quite as mysterious here. It also lacked the darker edges of potential threat that kept me so off balance the first time around. He stuck his nose in a little too much for me, as well, until he seemed more like a secondary character than the briefly glimpsed guiding hand he was in the first. For me, less is more when it comes to Tony.

Then there were the main characters, Bess and John. I didn't like them and I hated the relationship conflict that was belabored throughout the book. That conflict is prevalent in second chance romances, one of the reasons I'm not a big fan of the theme.

These two characters supposedly love one another, always have, but they destroyed their relationship on the first go-round because they were completely incapable of honest communication, refused to show any sort of potential vulnerability, and wouldn't know how to express an honest emotion if it was beating them over the head. Like I wanted to do to them both. Often.

That's not relationship conflict, that's cowardice. I don't find emotional cowards to be all that romantic, and it was the main issue between them throughout the whole book, coming up in the story again and again with equal intensity and fervor. The unnecessary angst of it all overwhelmed the good points to such a degree that the romance was an utter fail for me.

Had there been a more gradual arc of acknowledgement, communication, and resolution throughout the narrative - and there could have been, there certainly were enough issues - I would have felt much differently about the whole relationship between them. I would have liked the characters more, too. Bess is supposed to be a psychologist, after all, but there was no professional light turned on the shadows of her personal life. And John was oblivious to the concept of healthy relationships. He could have used her professional advice, instead of letting his case come between them for so damn long. Man, they frustrated me.

Parts of this book were deeply emotional and poignant. Not all of it was disappointing. The town and the characters in it were just as charming as they were in the first book, and the plot threads surrounding the missing persons case John's been stuck on for years were interesting, if a little too abruptly resolved. The writing, too, was just as strong and the magic just as warm and heartening.

Unfortunately, not even all of that could balance out how much I disliked the relationship conflict or how disappointed I was in the main characters and their romance. But it did leave me with hope for the next book. I'll go in with fewer expectations, maybe, but I do believe the magic can be recaptured.

Return from Upon a Mystic Tide to Paranormal Romance Genre

Return from Upon a Mystic Tide to OGBDA Book Review Home