Blanco's Back and Better Than Ever 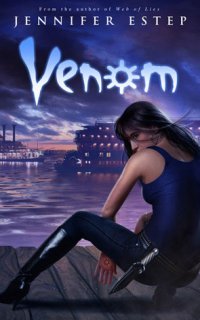 Gin Blanco is, among other things, a retired assassin. What she's quickly coming to realize, however, is while retiring is easy, staying that way is much less so. That realization is quite literally beaten into her by the giant Elliot Slater, right hand thug of family annihilator and Fire elemental Mab Monroe, after Slater and two of his enforcers accost her on her college campus at the behest of Jonah McAllister, Mab's lawyer and left hand sleazebag. McAllister is trying to find out who's responsible for the death of his son, but Gin takes the beating both to protect her identity and to protect those who lied for her a couple of weeks ago when she used a party at Mab's to get close to a target. She ended up killing Jake McAllister before he could rape and murder her, instead.

Gin survives the vicious beating only to come face to face with her long lost sister Bria. Overcome by unexpected emotions and unwilling to introduce herself to her sister just yet, Gin retreats to get some perspective and information...and healing. Before she can make any moves in the sister direction, though, two friends turn to Gin and foster brother Finn for the sort of help only a spider can supply. It's the kind of help Gin is happy to offer, actually, as not only does she feel responsible for the situation in which the vampire Roslyn and, by extension, the giant Xavier find themselves, but some sadistic giants just deserve to get dead more than others so it's the mutually beneficial sort of pro bono work that the Spider just loves.

Tricky part is making sure her friends and loved ones don't get dead first.

In this third foray into the seedy underbelly of a corrupt Ashland, Jennifer Estep is starting to get her groove on with Gin and Company. Venom is a much more streamlined and well-plotted book than its predecessors, and the main and secondary characters are hitting their strides as they develop and expand their rolls in each book.

Gin has been the drawing force for my interest in this series since the beginning, and she was in her sarcastic, self deprecating, delightfully deadly element here. In fact, I find she's growing more and more likable while maintaining that killer edge that keeps her firmly off the side of angels but doesn't quite propel her into villain territory, either. The fact that she's an assassin is no secret - though she's 'retired' now (works more than most of the actively employed I've met, but still) - and she has no regrets or tedious crises of conscience to make her a character of pathos and angst (which would really annoy me). She's a strong, capable, wily predator with a wide protective streak for those few people she considers her family, with just enough emotional vulnerability and past tragedy to make her sympathetic. I've become very fond of her through the series.

I really enjoyed how the plot of this book developed and appreciated the fast-paced opening sequence. I thought first two books in the series dragged at the beginning, but from the first sentence, Venom drops readers into Gin's head just prior to her savage attack and it's pretty much a non-stop ride from there. The plot did have a couple of rough patches, left several questions unanswered, and offered up one or two unoriginal plot twists (she got the wrong sister...really?), but those few issues were easier to take when surrounded by solid story. There were also a few instances of characters doing stupid things that created unnecessary havoc, making questionable decisions and nonsensical choices that served little purpose but to set up the latter events in the story. That's normally a major peeve of mine but the resolution of the final conflict was satisfying enough to smooth out my feelings.

A couple of my biggest issues with the prior books did carry over to this one, though to a slightly lesser degree. Estep's tendency towards repetition in the narrative is one of the biggies. Is it really necessary for Gin to qualify the gin as bitter eight times in a chapter or two? Or remind readers about Gin's relationship with Fletcher every time his name is mentioned? And is there anyone who has read any of the books in the series who doesn't know by now that Fletcher and Finn drank/drink chicory coffee and that when Finn does, it reminds Gin of Fletcher? I keep hoping to see Estep advance beyond that habit for repetition before pounding her readers over the head with it, but so far, no luck.

My other significant issues with the first two books in the series, Detective Donovan Caine's existence and the excessive exposition (if you read the second book, you didn't need to bother reading the first - it was practically rewritten in a condensed format in Web of Lies), were toned down in Venom. There's still room for improvement, as the combination of the excessive exposition and repetitive narrative compounds and amplifies both issues, but it's better than it was. As for Donovan Caine...he left in the last book and while his name comes up a lot, he - thankfully - doesn't. I didn't like him, haven't from the first book, and much prefer the more compatible alternative we spend time with in this book, Owen Grayson. Even though aspects of Owen's character are still a little rough and some a bit too convenient to be entirely plausible, when compared to the sanctimonious prig Caine, I have no complaints.

I'm pleased to see the direction this series is taking and the strides Estep has made with it. She long since charmed me with Gin Blanco as a heroine, but she's now also winning me over with a strong and clean plot that supports and complements her characters, along with improving technical mechanics and writing style. Venom is my favorite of the first three books, but I'm looking forward to Tangled Threads (Elemental Assassin, Book 4) which is slated for release on April 26, 2011. Long wait, I know, but I'm really starting to think Gin's worth it.