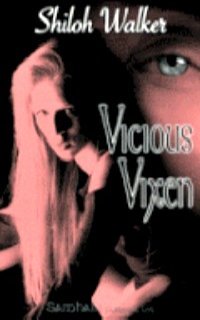 "They called her vicious.

They called her vindictive.

They called her violent, volatile...

But Graeme Lawson, arrogant bastard he was, he had simply called her his..."

This novella packs an emotional wallop that supersedes genre labels. Full of damaged, flawed characters leading damaged, flawed lives, you have to look really hard to find any good in the tragic lives of Vixen and the man she loves...the man she murdered...Graeme. With a sort of nebulous nod towards a more traditional mythology than normally exists in paranormal romance, the setting is simple and the plot deftly focused to encompass the shorter length of the book. Graeme is dead. Vixen killed him three years ago. She's the woman he loved - loves still - and he's relegated to an afterlife in what could be considered a purgatory of sorts, until a cowled being comes to him with a test and a task. If he succeeds, salvation and redemption for the woman he loves and for himself; if he fails, hell.

Sent back to a body that's not his own to save the woman who murdered him, Graeme is tossed back into a world of assassins and drug lords, killers, rapists and thieves. Vixen's boss pushes his deadly weapon closer and closer to her damnation with a job to kill an innocent, and Graeme fights to keep her firmly on this side of that line - as he fought all those years ago to get them both out of the game of death and pain. He can only pray that this time will be more successful than the last.

For its length, this book is surprising for it's sexual and primal power and the emotion it evokes. The plot has been bare-boned, to be sure, and there's not a lot of world or character development, but you don't really feel that lack when you're reading it because the relationship between Vixen and Graeme - seen through snippets of the past as well as experiencing it real time with the characters - is so intense and written with such dark decadence that any lack of either is easily ignored.

It was simply compelling. These are not terribly nice people - especially Vixen - and yet there is at their core a sense of vicious honorableness about them that makes them sympathetic. Any minor issues I had with the story weren't significant enough to detract from my enjoyment of the book and hardly merit a mention, but I will say I'm actually glad this wasn't a longer novel, as it was powerful enough at the novella length and anything superfluous would've detracted from the dark, emotional impact.

Return from Vicious Vixen to One Good Book Home