Wake Me Up Inside 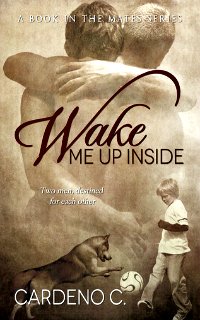 Zev Hassik is running out of time. The Alpha of the Etzgadol wolf shifter pack is young for his position, but at thirty, he's lived far longer than any male shifter ever has without tying with a female. And it's slowly killing him. Well, killing his humanity anyway. It's the nature of the beast, so to speak. The females of his kind are necessary to keep the males balanced between man and wolf.

That balance is quickly slipping from Zev's grasp. If he doesn't tie, he will soon no longer be able to reclaim his human form after a shift. He will be forever lost to the wild inside him.

Despite his family's worried intervention and what they feel is his inevitable fate, Zev has no intention of tying with any female. First of all, he's gay, though his family refuses to acknowledge it. Shifters aren't supposed to be able to be gay. If it weren't for one very important thing, even Zev would worry that he was abnormal and flawed, but Zev knows something that he hasn't even told his family. He has a true mate. A male, human true mate.

A gift beyond price and rare to the extreme, Zev has held strong against his very nature for the promise of that future bonding with the man who has been his best friend since they were children. Jonah Marvel has always been his, Zev has loved him for years, but he had to let Jonah go when they graduated high school. Jonah had to leave town to follow his dream of becoming a doctor and Zev had to stay to take over the pack.

Twelve years have passed now, though, years of struggle with the agony of being separated from his true mate. And if Jonah doesn't return soon, even a shifter as powerful as Zev will lose the battle to conquer the wolf inside him.

Stylistically unique and deeply emotional, the story of Zev and Jonah is told mostly through flashbacks of their lifelong history with each other and the friendship, then more, that bind these two amazing men together so tightly. It was more than a book, it was a sweeping emotional journey through time and across two very different cultures and I thoroughly enjoyed it.

I don't normally favor books that have a lot of flashback scenes, and the first seventy percent or so of this book is mostly flashbacks, but in this case, it totally worked. It did more than work. I don't think the book would have been nearly as emotionally intense if it hadn't provided such a deep and rich history for the characters' and their lives from their first meeting as children through every haunting moment of their time apart as they grew into adults.

Those flashbacks were my favorite part of the story, and that's not something I ever expected to say. With touches of gut-clenching angst, gentle humor, and searing passion, the path of Zev and Jonah's romance is fraught with a myriad conflicts and hazards both internal and external that were woven together into a very powerful read.

It wasn't flawless, though. Even as the story captivated my emotions and held me in tense anticipation of the culmination of their relationship, there were things that niggled my more analytical side. For all that the pain and misery that both men went through while they were apart made for a gripping story, and as amazed as I was by Zev's utter selflessness and patience with Jonah, I got a little frustrated that Zev kept him in the dark for so long.

If Jonah had known why it was so important that Zev withhold some specific things, or had even the first inkling of the sacrifice Zev was making for him, it may have eased some of the burden on both of them. It certainly could have prevented the most painful moments of fear, doubt, and recrimination, and all the subsequent bad decisions. It's not like Zev wasn't going to have to tell him eventually anyway, so the fact that he didn't when it could have helped bugged me.

The few threads of external conflict that cropped up in the present timeline were also a little underwhelming. Light on development and a bit awkward in places, I couldn't quite connect with the ancillary plot threads that related to Jonah's mother. They offered a chance at creating some three dimensional conflict in the adult lives of the characters, but the execution wasn't as successful as I'd hoped. It lacked the gravitas and emotional complexity that had been present in the flashback scenes, so it never felt like it added much to the story.

Don't get me wrong, it didn't detract much, either. The rocky, emotional road to Happily Ever After for Zev and Jonah was really enough to keep me fully entertained and leave me pleased with the read. I'm looking forward to continuing with the series and hope that future books will include at least some mention of both of them. I fell a bit in love with the guys in this book, and I'm dying to see how their lives progress from here.

I love Cardeno C books. This author is my new crack :) Her other stories are pretty saccharine, but hit all my love spots. I will definitely be reading this series next!

Oooh! I'm dying to know what you think of it if you read it, Mariana! This was my first Cardeno C book, but it won't be my last. I want more!

Return from Wake Me Up Inside to LGBT-M/M

Return from Wake Me Up Inside to One Good Book Home