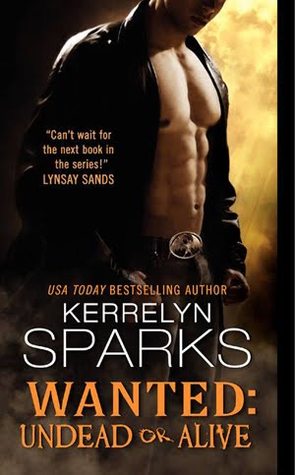 Disclosure:   An ARC of this book was provided to me through the Amazon Vine program. This rating, review, and all included thoughts and comments are my own.

Phineas McKinney has fought the good fight since Malcontents stole his life and turned him into a vampire. He's been rockin' the Love Doctor persona of Dr. Phang since then, making all the undead ladies happy, but after a few years of that, it's gotten kind of old. Phineas wants what so many of his friends have. Love. Family. Commitment.

It doesn't matter that his professional life is super sweet right now, or that all sorts of attention is rolling his way since he started doing the commercials for the vampire's newest fusion drink, Blardonney - half synthetic blood, half Chardonnay. That, on top of his security job, has set him up right. But he's still feeling that emptiness inside him. That need.

Going undercover on a job for MacKay Security and Investigation has him playing turncoat in the hopes of catching Corky Courrant, current leader of the remaining Malcontents. The setup was going well until the self-proclaimed Queen Corky got away from Phineas and the security team sent in to catch her. When fresh intel reaches the vampires about Corky's possible location, Phineas heads to Wyoming to try to track her down.

Problem is, Phineas is a city vamp, born and raised...and killed and raised again, so he's going to need a bit of help in the form of one vampire-hating, prickly werewolf named Brynley Jones. She knows the area, it's where her pack lives. Phineas has some hot memories of Brynley from when they first met. Memories like how strong and proud she is. How her eyes remind him of a cerulean blue sky he can no longer see. How much she loathes vampires in general and him in particular.

Yeah, that last one is a problem. But he needs her help, and if working with the lovely but caustic woman as they spend time in very close quarters ends up leaving his heart feeling like she's taken a stake to his chest, well then...so be it. After all, love hurts.

I haven't read a book in the Love at Stake series since Secret Life of a Vampire, the sixth installment, but I am familiar with the series. I enjoyed several of the earlier books, appreciated that it was lighter in theme than my normal paranormal romance reading, but had some darker elements that appealed, too. Almost nothing about this book appealed to me.

Not only did I find the plot one dimensional and the story absurd, but I thought the main characters...and more than one secondary and ancillary character...had the emotional maturity of average twelve-year-olds. And frankly, while I commend Sparks on writing a romance that crosses racial lines, I would have preferred the characterizations of both Phineas and his brother had they not been limited to sad, overused punchlines in off-color jokes. It would have been very nice had they been defined by something more than a mess of egregious racial stereotypes.

I felt the dialogue was adolescent and unrealistic and the relationship evolution between Phineas and Bryn raced from contentious to lusty to love with such alacrity that it gave me whiplash. The humor, a strength in other books of the series, was juvenile in this one...though I have to admit, one scene with Phin and a particular item of Bryn's did make me laugh out loud. Character actions and reactions lacked logic and I struggled to find any sense at all in some places.

Why does Phin need to stock up the cabin and sleep in the basement in Wyoming? He can teleport (and does) back and forth between there and New York any time he wants, with no apparent drain on his energy. Why does Bryn care about her father's feelings about her being with Phin? She banished herself from her pack five years ago with no intention of ever going back, and sacrificed her relationship with her sister for her freedom. For that matter, what does she fear her father would do about it that she hasn't already done to herself? Illogical stuff like that, prevalent in the book, drives me bonkers, even when it doesn't have a large impact on the overall story.

I know this series is wildly popular and my opinion is in the minority. I had fun reading several of the earlier books, too. Hell, I still chuckle to myself when I think about Angus MacKay checking under his kilt every time he teleports just to make sure all his bits made the trip. That's still funny to me. After this installment, though, I think my reading tastes and preferences have diverged a bit too far from where this series is now to consider reading any more of it.

Return from Wanted: Undead or Alive to Paranormal Romance Genre