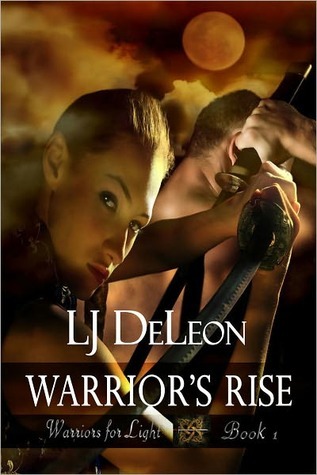 Disclosure:   This book was provided to me by the author for the purpose of an honest review. All ratings, thoughts, comments, and opinions in this review are my own.

In the opening salvo of the impending Great War, a war that could scour Earth and Otherworld of all life, the Dark Lord prepares to release his demonic hoard from the Abyss and set them upon the planet to destroy everything in their path. The Goddess of the Light has touched half fae, half human Deva Morgan, calling her to duty as the Caidh Arm and awakening in her the power and abilities that come with being the Goddess' Holy Weapon. By her side is the emissary of the Queen of Otherworld, the fae warrior prince Padraig. He was sent to both protect and train the Caidh Arm as her powers start to manifest and the forces of darkness try to hunt her down. He becomes her heart, her home, and her soul. Around them are an elite team of military supernaturals, magicks, and a gargoyle. They are her family.

Together this small band will rise up to unite the worlds and all its peoples in an effort to triumph over the evil of the Dark Lord. Not all of them will survive, some have been compromised, and as legions of warriors are drawn forth into the fray, it is Deva alone who must stand as the paladin for forces human, supernatural, and divine.

Ambitious and far-reaching, Warrior's Rise is an appealing story of love and war, faith and courage, and it entertained on several levels. The concept for the story was impressive. Compelling and complex, there were a lot of layers to the plot, and the shifting viewpoints between the Light and the Dark provided balance and added some interesting plot twists to the whole. Both Deva (eventually) and Padraig were strong lead characters and I loved their relationship. Their scenes together as they deepened their bond, and those with Padraig's family, were some of my absolute favorites in the book.

There were, however, execution problems, and I had some issues that hampered my full appreciation of story. The writing mechanics weren't always the greatest. Awkward grammar and several typos disrupted the narrative flow in several places, and a few repetitive concepts, themes, and thoughts got hammered out far more than necessary. Those are all pretty big issues for me in most cases, but I have to admit, I found myself so absorbed in what was going on in the story that it was less 'total deal-breaker' and more 'noticeable but relatively easy to ignore.'

The larger problem for me is the very scope of the story arc. Ambition is a double edged sword in this case, for while there is a lot that happens in the book, and a multitude of different species, groups, and creatures involved in those happenings, much in the way of description and explanation, world building and mythos creation, fell to the wayside to make room for it all. Secondary and ancillary characters had little to no individuality or character definition, conflicts rose and fell in abbreviated fashion, and emotions were glossed over or relegated to a bare minimum.

The first third of the book took the biggest hit in this area, and the initial trek of the team from the bar to the Goddess' Sanctuary was often confusing and muddled, with inconsistency in time passage. I never had a clear idea from whence they came on their trip across the country, but it sure did seem to take them a darned long time getting to where they were going, with sudden inexplicable jumps in the timeline in some places, and attention to daily developments in others. Yet while they were traveling, the daily battles and subsequent fall out left no room to get to know the characters or their world, or build up much fondness for them. That was a problem because it lessened the significance of the lives lost along the way. I never felt connected to them.

Too, the massive paradigm shift that occurs to the world's population was accompanied by a tremendous amount of external activity in a stunningly brief amount of time. I found it difficult to maintain a willing suspension of disbelief in the face of such sweeping change for Earth as it was portrayed here.

Then Deva and her group of warriors got to where they would make their stand and run the war. The book settled soon after, smoothed out, and started to add in those juicy plot threads about Sabina and the Dark Lord, as well as allowing Deva and Padraig's relationship time to breathe and expand. From that point on, I started to like the book more and more. There were still some problems, but the backdrop had finally come into focus for me and things were better able to spread out and develop along some intriguing pathways.

And as the book really started to take off, I started to notice some cool things about the plot, the action, and the characters. There were moments of pure sophisticated storytelling, and I was left admiring the imagination and the creativity of the author in several places. There were fun times that touched my heart and made me smile. There were surprises that tantalized, and foreshadowing of future events in the series that hold lots of promise.

I was particularly impressed with the dialogue. While the narrative had issues previously mentioned, DeLeon has an obvious gift for writing natural, conversational dialogue that always felt very organic to her characters and their situations. Not once at any point did the dialogue come across as stilted, unrealistic, or out of place. And when there was time given to descriptive passages, scene setting, or action, they were also handled with deft skill, painting enough for a picture to form in my head but not so much that I felt weighed down by it.

I do wish the book had kept to a narrower focus, and had taken advantage of the room that provided to more fully develop the world with fewer types of creatures, fewer characters, and a tighter plot. I think it may have set up a stronger platform for this book as well as laid firmer foundation for future installments. That being said, I still liked the book, and am pleased to have read it.