What A Demon Wants

This Demon Wants More Story In Her Story 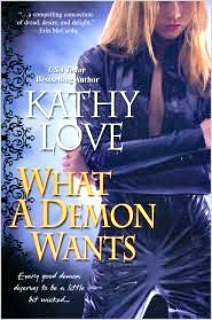 Reclusive author and demon half-breed Ellina Kostova has been beset by bad luck. Her home has been broken into three times in the past three months, books and research have gone missing, she's received weird phone calls, was almost run over by a car, and got stuck in a cat for several months. But really, besides that cat thing, which personally she blames on her trickster demon brothers, the rest can be written off as consequences of being a famous author and living in New Orleans. Her overprotective big brother, on the other hand, isn't quite so cavalier.

Guess that answers the question of why a demon...even a half demon...needs a bodyguard. Not that Ellina agrees. Not that her brother gives her a choice. Though, really, if she had to be stuck with a bodyguard, the sexy Jude Anthony isn't so bad. He's fun to look at, though that way leads to embarrassing hot flashes, scales, and horns... Yeah, that's a downer. So's the fact that the man's all about business, none too forthcoming about himself, and seems to have a distaste for touching demons. And people wonder why she's reclusive...or against having a strange man in her house loomi...er...guarding over her.

When she's attacked in a public restroom, however, disbelief in a threat all too real evaporates like so much smoke, and having Jude around doesn't seem like such a bad idea. When his seemingly icy behavior starts to melt, and his touch starts to turn from protective to possessive, though, a bigger danger looms large. Jude can protect her body...but who is going to protect her heart?

As a general rule, I don't like jumping into the middle of a series. I'm depressingly linear in my reading habits, and I don't like feeling lost in a book's previously established mythos and backstory. I can say that I didn't have that problem here. The reason for that, though, may be a bigger issue.

It's a perfectly entertaining read. For fans of lighter paranormal romance books, the characters are pleasant enough and their relationship cute enough to appeal. It entertained me on that level. Kathy Love has a breezy and light writing style I found pleasant. Ellina and Jude were likable. They had some nice chemistry. For a romance that was more fluff than substance, I enjoyed it.

That's a good thing, truly, because when I look for substance, it's in very short supply. I'm not sure what the series is like, as I went into this book cold, but What A Demon Wants was lacking on a lot of very critical issues. The world building was virtually nonexistent. There was no exposition about the created mythology, little framework for the world of the paranormals or preternaturals in reference to humans, and no explanation of what demons are, what they do, and what they're capable of doing.

Character development is similarly hampered. The fact that Ellina is half demon is briefly explained, as is her past, her career, and her family issues. None of which is really expounded on or awarded any depth (we're not even given details on that whole cat thing!). Neither is Jude's history, which is lengthy, so I certainly wouldn't expect the blow-by-blow, but it would have been nice to have a clearer idea of how he became what he is, as it's supposed to be impossible.

Plot threads were introduced, then left to dangle. Ellina's brother and his pregnant wife, Ellina's twin brothers, her father, all appear, initiate conflict or opportunity for some development, but are given nothing but cursory attention. The suspense subplot was the most evolved of all the threads beyond the romance, and that ended so abruptly and in such an anticlimactic fashion that I was almost agog. And agog isn't a good look for me.

I liked the romance, I really did. It was cute in an uncomplicated and simple way, with no real conflict or melodrama. A little sexy; a little fun. Everything quickly resolved and mostly feel-good. I appreciate that, because I'm a little burned out on melodrama at the moment. But I'm afraid if you focus on the characters in the romance, you'll notice they're very thinly developed, and if you look beyond the romance to the supporting plot threads you'll see too much potential that went unrealized. There just doesn't seem to be all that much story in this story.

Return from What A Demon Wants to Paranormal Romance Genre

Return from What A Demon Wants to OGBDA Book Reviews Home