What a Dragon Should Know

What YOU Should Know: The Dragon Kin Series ROCKS! 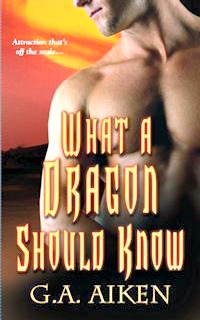 G.A. Aiken (the nom de plume of Shelly Laurenston) has risen to my "Favorite Authors/Read Immediately" list of late, and it's an exceptionally small list. In fact, she's only one of two authors who I will read no matter which incarnation of author's name is used. I just can't say enough how much I enjoy her books, especially, though not limited to, What a Dragon Should Know.

There have been exceedingly well-written reviews that have included synopses of the plots of the three books of the Dragon Kin series, so I won't attempt to do so again. What I will say is that with this book in particular, Aiken/Laurenston has really stepped it up a notch and included several layers of plot and different threads of story that include Gwenvael's always hysterical...in a bruising, squabbling, nearly life-threatening sort of way...family that we've met and spent time with in her previous books, as well as introducing characters and threads that don't come off feeling shiny new, but just as detailed and significantly back-storied as those of which we'd already been familiar. Introducing Ragnar and weaving his back story in with Dagmar's life, as an example, is a small part of What a Dragon Should Know but felt integral to the story and was quite a little gem. Should Aiken/Laurenston continue the Dragon Kin series (and I'm willing to beg - no...seriously...begging and pleading are not beneath me) we've been given a wealth (dragon's treasure-sized) of opportunity for future development of story lines that could support a series for a long, long time. (Beg. Plead. There may even be tears.)

I will say that while I applaud and adore the direction and depth of What a Dragon Should Know, the romance of Gwenvael and Dagmar isn't a central focus of the book in the same way that the romance was a focus of the other two books. I appreciated the depth and complexity of the book as it was written, but would've liked to have also spent a little bit more time reading about Gwenvael and Dagmar as their relationship changed and deepened into what it became. There was perhaps so much going on - and this is a book where a lot happens - that the pairing suffers just a little bit on detail. For that reason alone, I'd rate the book 4.5 stars...yet still consider it one of my favorites for the year. All in all, an excellent series, but don't start the series here - it will not work well as a stand alone. Treat yourself to the whole series and start at the beginning with Dragon Actually. It's well worth it.

Return from What a Dragon Should Know to Genres