When He Was Bad 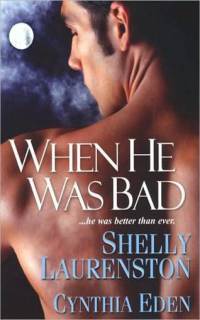 I tried to avoid it. I don't really like anthologies much. I'd be perfectly happy buying individual novella-length ebooks all day long instead of buying an anthology. Problem is, I wanted to read one of the stories in this book more than I didn't want to buy an anthology.

It was worth it, though. I wasn't as pleased with Eden's Wicked Ways as I was with Laurenston's Miss Congeniality, but the two novellas combined for a solid read overall and I'm glad I read it.

It's 1984, and for seven long years the prince of the Van Holtz family, Niles Van Holtz, has shamelessly pursued brilliant Ph.D. and college professor Irene Conridge. A former child prodigy and world-renowned physicist but about as removed from socially adept as a person could be, Irene doesn't understand why Van Holtz bothers. It's not like she hasn't made her general annoyance with his existence perfectly clear. Nor is she any sort of beauty. Still, the man with enough females swooning after him to start his own cult just keeps popping into her personal space whenever she's at an event for the school. Him and that arrogance of his, which surely has its own zip code.

Van is quite happy being a total hound with the ladies. He has no intention of settling down and is quite content with his life, which is split between managing the top Van Holtz restaurant with his sister and making time with as many lucky ladies as he wants. Still, there's something about the pale-eyed, bitchy, brilliant Irene that calls to the wolf in him. Has ever since he first caught scent of her all those years ago. He can't help teasing her and poking at her at every turn. Her certainly wants to bed her.

When he's on his way home from an event that...well...didn't end so well considering the stitches he's going to have to have, he sees Irene's car parked near his pack's territorial borders. Borders shared with a pride of lion shifters and a pack of hyena shifters. And Irene is nowhere to be found. That's about when things for Niles Van Holtz, future Van Holtz pack alpha, and professor Irene Conridge, brilliant physicist, start to go to the dogs.

Here is incontrovertible proof of just how big a fan I am of Laurenston's work. I have no fondness for prequels, to start, and just the thought of reading a prequel after I've read other books in the series timeline makes my OCD-having butt breaking out in hives. I'm big on series timeline order. I find it comforting.

Still, here I am, gobbling up Miss Congeniality. And gobble I did. I squealed and laughed, giggled and gasped. For the record, Laurenston tends to have that affect on me. Hell, I even laughed over the reader's note she wrote for the forward! Her humor is just my kind of humor.

She's a damn good storyteller, too. I haven't been quite as thrilled with the romance threads in her last two full-length books as I have in all the others, but this one takes me right back to Happytown. I loved Irene and Van. I loved their characters (they have some great banter), I loved their romance, I loved the 80's flashbacks (though I could live my entire life cheerfully forgetting the hairstyles of the day), and I loved the few threads of danger and suspense that added some depth to the story.

In fact, I loved absolutely everything about this little gem, and I was very impressed with the seamless attention to detail as Laurenston bridged this novella to a scene in the second book in the Magnus Pack series. Everything fit perfectly. I've said it before and I'll say it again, Laurenston books (including those she writes as G.A. Aiken) are my crack and I'm happily addicted. She always leaves me wanting more.

As far as first dates go, Miranda Shaw has had better. Much, much better. The man she met online turned out to be worse than even the most horrific horror story. In fact, he's not a man at all, but a blood-thirsty monster. A monster that Miranda hadn't believed existed until he sank his fangs into her neck and started to drink. That's when Miranda started to scream.

He'd moved into his new house five days ago and Cain Lawson had been dreaming of his sexy neighbor since she introduced herself and brought him cookies. There was something about the pretty Miranda that draws him and strokes the fur of the jaguar inside him. Hearing her horrified scream, though, and busting into her house to see a vampire feeding from her, makes former FBI agent and shifter Cain go all kinds of primal.

The attack on Miranda takes on a more sinister meaning when the vampire who attacked her is identified and turns out to have a dark and deadly human past. Now that he's a vampire, he's infinitely more dangerous and harder to stop. And he's got Miranda in his sights.

I'm a long-time fan of Eden's dark paranormal world. I've always enjoyed how her multiple paranormal series and books exist within the same world with the same mythos, so just the stories and characters are changing. It makes it very easy to slip into a new story without needing too much world-building. That also benefited me in this novella, where I didn't need page time wasted on a lot of exposition.

Eden's edgy, sexy romance fiction leans towards a darker edge than Laurenston's, but Wicked Ways was still a good pick for the pairing. I just had trouble warming up to the storyline in this one. The characters were okay. Neither got on my nerves too much, but I wasn't totally sold on the supposed depth of their feelings for each other as their relationship evolved.

Without a doubt Eden writes smoking hot sex scenes, but in this case, one or two fewer would have allowed for a more well-defined suspense plotline, or there could have been room for added character development and more focus on the emotion of the romance instead of the sex. It's not that I actually disliked anything I read in this novella, but nothing really wowed me, either, and Miranda's involvement in capturing the vampire strained plausibility. This one was an okay read.

Miss Congeniality!!! LOVE this book, I've re-read too many times to count.

It's pretty interesting to me that she has a few anthologies with Cynthia Eden and I still can't get into CE's books. I read 1 (can't remember what) and haven't been able to pick her up again.

LOVED Miss Congeniality. It was a total hit in every way for me.

Eden's books tend to be hit or miss with me. I've read several and have enjoyed some, but others, like this novella, just don't work for me as well. I do like her world, though, but I can understand her stuff not working for everyone. ;-)

Return from When He Was Bad to Paranormal Romance

Return from When He Was Bad to OGBDA Book Reviews Home