When You Give a Duke a Diamond

Didn't Quite Sparkle For Me 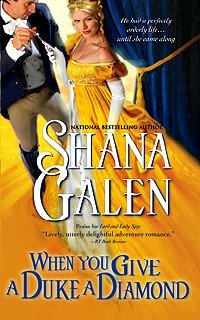 She is...flawless. Women revere her for her sense of fashion and style, men yearn for her attention. The Duchess of Dalliance, sobriquet bestowed by the Prince Regent himself, supports herself on little more than the fickle attention of the ton. She is a known courtesan, one of three under the protection of the Earl of Sinclair, the Earl of Sin.

The truth, Juliette knows, is largely immaterial in these sorts of matters.

The papers have lately taken to linking her name with the Duke of Pelham, a man whom Juliette has never actually met. To fan the very flames of speculation and rumor which assure her continued validity in Society, Juliette maneuvers an introduction to the dour but powerful Duke when presented the opportunity at Prinny's latest fête.

The Duchess is horrified - on the inside, she certainly doesn't let it show - when the Duke publicly cuts her, then calls her a whore. In front of the Prince Regent and all the ton.

With her future now at risk and humiliation burning a hole in her soul, Juliette escapes the crowd. Unfortunately, her evening is not destined for improvement. As she stands in the shadows on the balcony, the Duchess witnesses a vicious murder. To truly consign the evening's events to the deepest depths of hell, the victim is no other than the Duke of Pelham's fiancée.

And Juliette knows the killer, a true devil of a man who calls himself Lucifer.

Her first instinct is to flee, but her actions throw her directly into the path of the Duke of Pelham. Problem is, the man not only doesn't believe her, he makes it clear he has no intention of sullying his reputation with the likes of her, no matter how desperate she is for his help.

This series debut by Galen perplexed me a little. It wasn't at all what I was expecting. There is quite a discrepancy between the book blurb and the actual storyline. And not only that, but the tone of the book is different, as well.

That's not a criticism. I liked the premise of the storyline quite a lot and particularly appreciated the threads of suspense in the book. It was more the characters and the inconsistency in the execution of the story that gave me pause in places.

I struggled with Juliette's character. I kept hoping she'd explode across the page with self-sufficiency and independence, push beyond the dictates of society and force Will to judge her based solely on her wit and strength, and that just never quite happened. It's not that she was a victim or a damsel or anything like that, but she very much lived a life within the boundaries. That disappointed me.

The Duke, Will, was a bit of a different kettle for me. I loved his quirky OCD issues and all his stiff-upper-lipness. I was so charmed by him when he got his first glimpse of Juliette. I loved Galen's writing in that scene. There was such a delightful sense of self-deprecation in him.

And then, unfortunately, he spoke.

He turned into an utter prat who treated Juliette with cruelty and disrespect for no other reason than he was displeased by his attraction to her and he assumed she was responsible for the gossip articles that his friends keep mentioning to him. He punished her, was as offensive and humiliating as he could be. And throughout the rest of the book, just when I started to warm to him again, feel some sympathy for his character or amusement at his quirks, he'd open his mouth again and crush Juliette.

By about the third time I could no longer understand why she took it like she did. And that severely impacted my ability to fully enjoy their romance. By the end of the book he had disparaged her one time too many and the final resolution didn't have nearly enough of him on his knees grovelling for her forgiveness.

I had a couple of other small issues with the plot of the external conflict. It seemed fairly one dimensional, and there was an odd plot twist or two that lacked the emotional impact it could have had. There were surprises, but those surprises were based on my uncertainty about the plausibility of some of the events, and I wish Juliette's backstory had been better represented to provide a more well-rounded foundation for others.

Without a doubt, there were some fun moments in this book, and I thoroughly enjoyed Galen's writing style. The plot thread with Lucifer is something I'm assuming is going to carry through each book of the series, so I look forward to seeing how the other two diamonds will play into it all.