Where There's a Will

The Beauty of Scotland Abounds 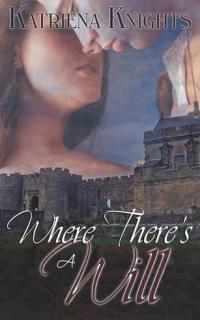 Chloe Sullivan arrived in Scotland to see to the provisions of her great-uncle's will. When she finds out that Uncle Fergus had some very unique and ludicrous ideas on what she had to do to inherit the castle, land, and the home he left, Chloe is incredulous. She has to marry a Scot to take possession of the property or see the land go up for auction - to anyone willing to pay if she leaves before a month is out, but if she stays the month, the property will stay in local hands. As she had come to Scotland with the idea of getting rid of her inheritance and returning to the States as expediently as possible, the codicil and one month deadline doesn't make her happy.

The longer she stays, though, the stronger she feels a connection to the land. For the first time in memory, Chloe feels that she truly belongs somewhere. Even knowing she has to go back, has to return to her own country, she can't help but feel a part of something much bigger than she - the often brutal but always magical history of a land so full of unconquered people and places. She just never figured Scotland would so irrevocably sink into her soul. And she certainly didn't know what to do when the handsome local Malcom MacTavish, friend, guide, and co-conspirator, just as irrevocably sinks into her heart.

With such a sweeping and romantic backdrop, Katriena Knights had a great vehicle to showcase a genuine gift for some lyrical description in the narrative and an appreciation for the history and flavor of the country of Scotland. One of my favorite things about Where There's a Will is that it felt like a very genuine representation of the country and an accurate glimpse of some of the beauty and history imbued in every rolling hill and sprig of heather.

The romance itself was formulaic, but that's never particularly bothered me in contemporary romance. One of the draws of romance makes some formula almost a necessity. What did bother me is that within that formula was a conflict that was egregiously predictable and felt contrived when viewed against earlier character and plot development. Following the conflict was an equally predictable resolution that, for me, felt a little lacking. As a result, the romance didn't end on as high a note as I was hoping.

The characters were likable, if low on complexity. Chloe was pretty cut and dried as far as characters go. I think Knights did a particularly good job slowly imbuing her with an appreciation for Scotland as the story developed around her. It felt very organic, and really provided a nice vehicle for the reader to get a pleasant overview of the country and a glimpse into why it's such a magical place for so many. Her feelings for Malcom and their relationship also developed in a realistic and natural-feeling timeframe and didn't feel rushed or pushed. Malcom had some emotional baggage that added a bit more character depth than was given to Chloe, but it was a little underused in some parts, over extended in others, and neither character was really all that deep.

I have to admit, there was really only one thing that I found truly objectionable about the book. I got to the point where I hated the Scottish characters' dialogue, which was written as it would be spoken with an overwhelming burr, and all the Scottish colloquialisms and terminology. I don't know that I've ever read a contemporary romance so heavily laden with ayes, nays, dinnaes, wouldnaes, kens, ye'res, 'twoulds, and much, much, much more. The combination of the written accents and the terminology used kept giving the dialogue the feel of a historical romance and left me scrambling to interpret passages in the narrative - and not always feeling successful at it. It was distracting and, strictly in my opinion, a bit overdone.

Neither the plot nor any other aspect of the book had much in the way of depth. That's not really a complaint, though. There is definitely a place for simple, sweet, and relatively uncomplicated romance. And simple, sweet, and relatively uncomplicated sums up my feelings for Where There's a Will. It was well written, with passages of sweeping lyricism and a sense of cultural and historical authenticity. It had characters who were pleasant to spend time with, and while the romance stuck to a common formula, and the conflict of the romance left me feeling dissatisfied, it was a nice enough read and an easy way to spend some time.

Return from Where There's a Will to Contemporary Romance Genre

Return from Where There's a Will to OGBDA Book Review Home