Whispers on the Wind 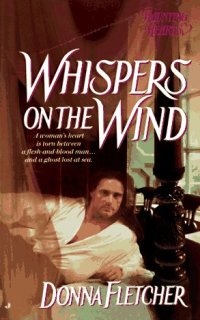 Having been raised in Nantucket, Massachusetts, where wives and children of husbands and fathers who spent far more time away at sea than at home learned quickly to rely on themselves, Belinda Latham considered herself a modern and independent American woman. The year was 1808, and following the tragic death of her mother, stepfather, and uncle, Billie was alone in the world and virtually penniless when she received word from Cornwall, England, that she was the sole beneficiary of a wealthy estate in St. Clair. With little more than hope and a steady trust in herself, and of course more than a fair share of her father's adventurous spirit, Billie took the reins of her life fully in hand and left America for England, intent on becoming the next Lady of Radborne Manor. Not that she had the first idea on how to be a Lady, really, but the opportunity would not be passed up.

What she got was a wealthy but forbidding estate full of dour colors and lifeless severity, a couple of friendly servants who were a bit aghast at her independence, a murder mystery, and the sexy as sin ghost of the former Earl of Strathorn, Maximillian Radborne, who insisted in quite a full-blooded and corporeal fashion that the manor was his, the bedroom was his, and while Billie was welcome in it, she was to do nothing at all with her new home, as he liked it quite a lot just as it stands.

Billie, being the independent and progressive woman that she is, ignores the ghost - once that pesky fainting had passed - and sets about turning her new home and all its inhabitants, ghostly or not, on their ears.

Maximillian was running out of time to find the one responsible for his father's murder and his ghostly condition, and he was not thrilled to be left with only the stunning but stubborn witch Billie to help him. He had little choice, there were places he could not go, questions he could not ask, and he had to rely on her inherent curiosity to help him solve the mystery. Her inquiries, however, start drawing the wrong kind of attention and soon Max is torn between needing her help and wanting with heightening fervor to to keep her safe.

Unfortunately, when it comes to Billie's affections, Max is positively beside himself. While he knows he stirs her nightly passions, the local vicar John Bosworth has become quite her confidante these past weeks, and is obviously stirring her softer emotions. And no amount of bellowing at her to get rid of the fop is doing him any good whatsoever. He's got to find a killer, that must be his top priority, but he can't keep his mind off Billie, despite knowing his time running out. One way or another, his ghostly spirit will be laid to rest.

It was only fair to get that off my chest, because I loved this book. I did. I'm not even that big a fan of the genre, but I saw it available for my book-hungry Kindle for the ridiculously cheap price of $.99 and I thought, "Eh, how bad could it be for that? It's probably a novella."

Ha! Not only was the book not bad (yeah, I know, double negative - sorry), but it also was in no way a novella. In fact, it's quite a thorough and lengthy book, so my deal-loving, reading-frenzied heart just went pitter-patter all the way through the thing.

The characters were great. I loved, loved, loved Billie, who was so clearly American in all ways. I can't recall ever reading a book quite like this before, where the effects of the difference in the cultures between America and a feudal England were so brilliantly utilized as both character development and a plot device. Billie, a relatively common woman by Nantucket standards, fresh from a country that disdains any form of monarchy and raised to be a self sufficient and independent free-thinker is thrust into a position of Lady of a wealthy manor and suddenly has servants and social obligations. Not only does her upbringing so clearly define her mind and actions, it totally confuses and enchants...or frustrates...absolutely everyone she comes in contact with to often humorous or at least endearing results.

And I thought her reaction to the ghost of Maximillian was both adorable and believable. Had it been a contemporary novel, it would not have worked for me at all, but it wasn't, and it did. Expounding any more on that would give away too many of the secrets of the book, so I won't.

Actually, about those secrets...none of them were all that secretive. It was relatively easy to suss out the mystery and put all the pieces of the great big puzzle together pretty much from the beginning. If I was forced to say anything critical about the book, I guess that would be it. For all the twists and turns of the plot, and there were a plethora of them, none of it was in any way surprising to me, so the impact of any big reveal moment just didn't work.

That usually annoys me. In fact, I've criticized more than one book for that very thing, and yet in this case, it just didn't. And I know why it didn't. Because Billie was just so darn appealing a character, and she didn't take any guff from Max, no matter how loudly he bellowed or how insistent he became, or how annoying he was popping into any room he wanted whenever he wanted. I just loved that about her. And so I didn't much care that she wasn't as astute in figuring out one or two tiny little plot points. She was brave, and she stood up for herself, and she relied on herself. I admired that.

Yeah, Max was a charmer, too. His whole Lord of the Manor attitude was so completely ineffectual with Billie that it was hard not to just be amused by it. And Billie did figure out quite a lot, even if she wasn't totally certain of some things. I loved them together. I even liked the vicar, who just gave Max fits. I certainly have no complaints over the technical writing aspects either. The narrative was smooth, nicely descriptive, and the dialogue fast and fun and conversational...or seemed to be for the time period, but what do I know?

So yeah, I guess there were aspects of the plot that were a bit too easy to figure out, but in the end, for me it all came down to the characters and their chemistry. It came down to Billie. And Max. And my deal-loving, book-hungry Kindle. If you like fun characters with tons of chemistry and a female heroine with more spine than common sense (to be fair, she had a lot of spine) in your historical romance and don't mind a ghost or two, I can happily recommend Whispers on the Wind. In fact, at that price, I pretty much insist on it.

Return from Whispers on the Wind to OGBDA Book Reviews Home