Too Dark a Dawn for Me 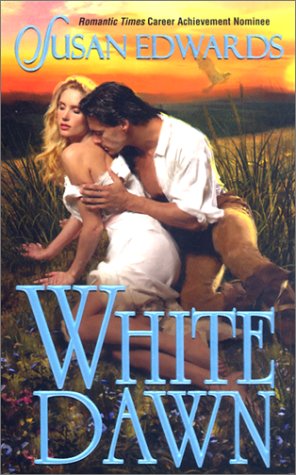 Disclosure:  An ARC of this book was provided to me by Carina Press via NetGalley. This rating, review, and all included thoughts and comments are my own.

She is sixteen and alone in a wilderness she can't survive. Her parents are dead, cut down right in front of her. It's 1810, and Emily Ambrose is terrified, grief-stricken, and broken. And then she is found by a young Indian, one who guides her, protects her, provides for her, makes love to her. But never speaks to her. Until he too, leaves her.

Emily doesn't know why. Or what she did that made him leave. She knows she loves him and is devastated by his loss, even if she never knew his name. She knows her hope and confidence, and any meager joy she had found since watching her parents slaughtered, is gone. Not even the gentle kindness of the trapper John Cartier, the man who finds her after even her Indian left her, is enough to convince Emily she has any worth at all, or any hope for a future too bleak to survive.

From the moment John stumbles upon Emily in the woods, she's like sunshine to him, a bright source of warmth and joy. He can tell she's deeply wounded, emotionally drained. Fortunately, John's a patient and caring man, and he sees Emily as just another wild, traumatized soul who needs help similar to that he's always given the creatures of the forest. He yearns for her, but he knows, beyond doubt, that unless she's given space, time, and gentle handling, the bright light that shines in her will go dark forever. And that's just not acceptable to John.

He wants a chance at a future with Emily. She is forever to him. He just needs to convince her.

Originally published in 2002, White Dawn has beens re-released along with the other eleven books in Edwards' popular White series. Western Romance novels aren't my favorite type of historical, but I was curious about this one and wanted to see where the series began. I wish I'd liked it more.

My issues had nothing to do with how the book was written. It's certainly authentic for the time and the story is told with solid technical skill. There were some minor issues with a bit of repetition in some of the plot points, but that complaint was minor. The characters were nicely fleshed out, Emily's backstory intensely sympathetic, and John's past well-defined.

Unfortunately, I thought the first quarter of the book too harsh and depressing to be entertaining and I got very frustrated with Emily's character when she was mired in her depression. It was realistic, I suppose, and even understandable. There is such a thing as too realistic for me, though, and this is a good example of it.

Plus, I couldn't help but be a little squigged out by her relationships with both her Indian (because of the result) and John, who at ten years her senior seemed to have achieved an aura of adulthood that Emily had not. It wasn't the age difference - that' wasn't my problem. I just never felt Emily was all that grown up at any point. And that bothered me. I know that a sixteen-year-old was considered an adult back then. I do. But there wasn't enough maturity in Emily's character for me to forget or forgive the instinctive ick-factor of a young girl in her position.

I really liked John. Truly. He was a gentle giant and I loved how he related to the animals and to Emily. He was my favorite character in the book, hands down. His friends and his grandfather also made great secondary characters. I even liked Emily later in the book, when she'd warmed up to John and stopped being so depressed. There just wasn't enough of that for me to really appreciate her character in total.

The storyline was a little weird for me too. I know it's the first book in a well-developed series, but reading just this book on its own caused some problems for me. Swift Foot's backstory and his influence in Emily's life was not only depressing, his storyline cut off with no resolution and a sort of emotional downer. Maybe he's featured in other books, maybe he and his tribe play a part in later books, but it leaves a hole in this one. So did John's cousin. Not a good guy, obviously, but his storyline just sort of cut off suddenly with no resolution.

There were aspects of the book that I did enjoy. Plot points and characters that I found entertaining. Too few of them, though, for me to truly embrace the read or give me any interest in continuing the series to see if any of those threads that were left dangling get woven into subsequent books. This one's not for me.