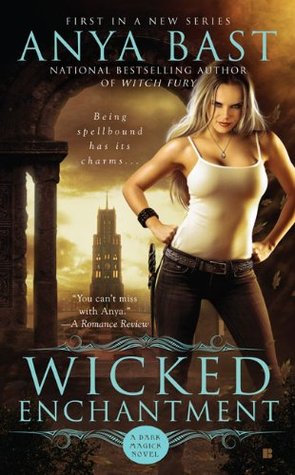 The first book in Anya Bast's Dark Magick series is a detailed, fascinating, sensual delight. Well-plotted and perfectly cast with characters that are strong and fully formed, Wicked Enchantment is ripe with tense and dangerous antagonists in a world already fraught with the beautiful deceptions inherent in the lives of the Seelie and Unseelie courts of the Tuatha Dé Danann. A throughly enjoyable read that was impossible to put down.

Wicked Enchantment starts with the arrival of Unseelie half-incubus Gabriel to the Rose Tower of the Summer Court under the guise of petitioning the Summer Queen for admittance to her court. The queen commands her subject Aislinn, a high ranking Seelie, to be his helpmeet, showing him around for the week while the queen debates the merits of Gabriel's petition. But Aislinn is wary of the Unseelie who commands the attention of every female who sees him, especially when Gabriel's attention seems fixed solely on her. She protecting a few potentially devastating secrets about herself and doesn't trust that Gabriel isn't hiding a fair share of his own. And after the recent and devastating blow of a public breakup with her former partner, she sure doesn't trust her body or her heart to the seductive Unseelie. But once forced into his presence she comes to realize that there are just as many layers to Gabriel as their are potential secrets, and trust - and attraction - slowly starts to build between them. That attraction could ultimately lead to the end of the world as they know it.

There is depth and richness in the fae mythos of the first book of the Dark Magick series and it certainly doesn't read like a first book. Instead of being overburdened by extensive exposition and world building at the sacrifice of story, or being heavy on story but leaving the world encapsulating it largely undefined, Wicked Enchantment strikes the perfect balance and hits all the right chords. The world building is delicately interlaced with a seductive romance, realistic main characters, intriguing secondary and ancillary characters that I'd love to read more about, and insidious threats from without and within. Very well thought out and tightly paced, it spans a satisfying arc of development for the main characters and culminates in two very different sort of conflicts - one that threatens the lives of Aislinn and Gabriel...and one that threatens their hearts and souls.

Wicked Enchantment was ultimately satisfying in every way. Truly a fun, fantastic read. I can say with all seriousness that I can't wait for Cruel Enchantment, book two of the Dark Magick series, which is due out in September of 2010. I will definitely be continuing and recommending this series.