Not Convinced of the Wicked...but the Game is Fun 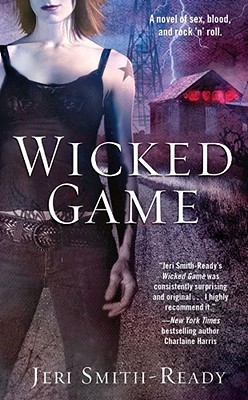 Ciara Griffin is a con artist trying to go straight. Toting around baggage from a childhood that was anything but "traditional", she stumbles upon a job that may just be made for her - advertising for WMMP radio. Only problem is, the radio personalities are all vampires, and when Ciara finally wraps her mind around that - courtesy of the sexy yet obsessive compulsive Shane McAllister and his wicked fangs, Ciara embraces the night. WMMP becomes WVMP, The Lifeblood of Rock & Roll, and Ciara becomes an advertising phenomena. Who knew going "straight"...more or less...could be so much fun?

Wicked Game is the first urban fantasy I've read in a while featuring a perfectly ordinary...more or less...human female protagonist who doesn't have any interest in special powers or becoming something she's not. And that's refreshing. Unfortunately, the concept was refreshing, but Ciara herself didn't do much for me as a lead character. I don't even know why, really, as there wasn't anything particularly objectionable about her character, but I couldn't seem to warm up to her and I didn't find her very sympathetic as a heroine.

The secondary and ancillary characters were varied and interesting, the vamps in particular were unique and full of personality, and the plot was unique and felt fresh. It's just not quite to my reading preference, though, as my tastes for urban fantasy trend towards either high level of external conflict, strife, and a fair amount of butt-kicking, or a comedic romp with fae, fur, fangs, and/or claws. This book wasn't either of those for me.

I also wasn't totally enamored with the vampire mythology presented here. Vampires are stuck in the era that they were turned, and as a result, the lose touch with the modern world quickly, fading mentally and losing themselves rather quickly. That isn't exactly any sort of motivation to want to become vampire, nor change anyone once you're a vampire yourself, yet there seems to be a number of humans who want to become one. That didn't really work for me, nor did it make sense. In fact, it makes "eternal life" seem rather like hell - and remarkably short lived.

The irony is that while I wasn't a huge fan of that aspect of the world building, I can't argue that it was also one of the more original vampire mythologies I've seen created for a series, so I ended up appreciating it from that standpoint. And that's sort of where my feelings fell for almost all aspects of the book. It wasn't exactly to my taste, I wasn't fond of it for my own reading pleasure, but I appreciated it for the well written, original, unique series debut it is.

Unfortunately, I don't think I'll be continuing with WVMP. There's lots of promise there, and I can thoroughly understand it's appeal to a wide audience, but for me, there are just too many elemental issues that weren't to my liking.

This is one of my favorite books but I see what you're saying. It is a unique world and style and I have a friend who couldn't warm up to it either.
Great review. Not every book is for every reader!

Exactly!
I knew as I was reading it that it was a well written and original book with tons of series potential - just as I knew it wasn't to my personal taste.

These sorts of books are so hard to review because I can't say I liked it - but I also can't say I don't totally understand why many others do. I tried to do that and I'm glad to hear that got across.