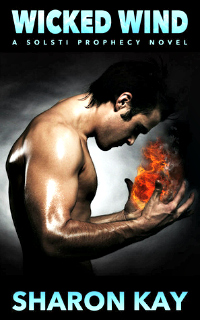 Nicole Bonham knows she and her sisters aren't normal. She doesn't know why that's so any more than she knows where their unique talents come from, but with her ability to manipulate wind and her sisters' talents with fire and water, the three of them are definitely not like the rest of humanity.

She can accept that. Has accepted it. Never once in her life, though, did Nicole ever doubt she was human. It never crossed her mind that was even a possibility. Then she meets a gorgeous guy in a club. There's no arguing he's smoking hot and, man, he can dance like a demon. As far as Nicole is concerned, it's her lucky night...right up until the guy tells her he actually is a demon.

If that isn't freak-out-worthy enough, the guy, Gunnar, admits he saw her use her power to help someone earlier that night and he wants to know what sort of supernatural being she is. Yeah, that's pretty much when the freaking out started.

As a Lash demon, Gunnar is very good at hunting down dangerous demons and keeping them from making a deadly mess in the human realm. After more than two centuries of doing just that, he's gotten very good at identifying supernaturals by their power signature alone. Nicole's power, though, is like nothing he's ever felt before.

Knowing how the bad guys work leaves him no doubts, either. If any of them find out about Nicole and feel what she can do, they won't bother asking questions, they'll either take her to use her, or they'll destroy her. And that's not something Gunnar is going to let happen. Not when the proud, stubborn female makes him feel things he never knew he could feel and want things he's never wanted before.

This series debut has several really good things going for it. I liked the world quite a lot and appreciated the detailed world-building. There was a nice amount of the story dedicated to fleshing out not just a few of the demon races, but other supernaturals as well. And I loved Gunnar and Nicole's trip to the demon realm, Torth. That was a whole lot of fun.

There was also a lot of heat in the relationship between Gunnar and Nicole. The chemistry between them was strong from the moment they meet and I liked that a lot, and Kay can definitely right sizzling sex scenes.

Gunnar and his Lash demon cohorts were fairly typical for the genre and not unlike the main characters of several similar-type paranormal romance series, but that's never been downside to me. I happen to like that particular formula of a brotherhood of alpha-male warriors and they worked for me here. It helped, too, that we met several who intrigued me and kept me entertained beyond just the main characters.

I enjoyed Nicole through most of the book. Romantic heroines are very often the weak link in books for me, and truthfully, Nicole had her moments, too, most notably late in the book, but I loved her bond with her sisters and she was a strong, independent woman who definitely knew her own mind. I was enamored of her from the moment she decides to use her talent to help people, long before she even knew what she is.

What she and her sisters are is probably my favorite aspect of the book. I totally dug the idea that they're so rare, even other supernaturals don't believe they are anything but myth. That tickled me, especially when Nicole keeps meeting supernaturals who express their disbelief. That made me grin every time. It was great.

I have to admit, though, I wasn't sold on the plot of the external conflict. Part of the problem for me was the limited amount of time given to it in the story. The Big Bag doesn't show up until the 67% mark and that was just too late in the book for his plot threads to really offer significant contribution to the story as a whole. It didn't help at all that Nicole had a few TSTL moments that led, in a painfully obvious manner, to a climax that seemed both predictable and abrupt.

There were also a few too many breakaway scenes for my tastes, scenes that focused on secondary and ancillary characters. I didn't mind Kai's. I liked him a lot and I loved the acrimony between him and Nicole's sister Brooke. It may be easy to see where that's headed, but I adore that sort of conflict, so I'm totally on board with their impending tale and loved how it was set up in this book. And as his story is up next in the series, it made sense that he and Brooke had some groundwork laid here.

Raniero's, on the other hand, was a problem for me on several different levels.

I would much rather have had the story offer more depth and definition to the bad guy and his plans instead of pages of excessively detailed information about Raniero's past. And that's not even touching the issue I had with his supposed endless love and relentless search for Ashina - given that he's spent all his free time since he last saw her, and I quote, "buried between the willing thighs of beautiful females." Made it hard to feel anything at all for the pages of tragic history that preceded that little gem and it didn't exactly endear me to Raniero as a character.

Plus, he wasn't a significant enough character for any of that to be necessary in this book to begin with, so all of it just completely turned me off.

The meat of the overall story seemed to focus more on the sexual and emotional relationship between Gunnar and Nicole than on the bad guy doing bad things, and that was really my biggest issue. There was a lot of sex in the story. It was very hot sex, for sure, but for me to really enjoy that much in a book I need other story elements to be given equal attention, and that didn't quite happen. My preferences lie with a more robust external conflict and a more plot-driven narrative. To me, the relationship between the main characters overpowered everything else and the romance itself got a little too schmaltzy for me by the end.

The good points in the story didn't quite outweigh my issues, but to be fair, the majority of those issues are a personal preference thing. For fans of paranormal romance with more attention on the R than the PN, the very things that didn't work so well for me would totally appeal. And because of those good points, not to mention the delicious teasers for Kai and Brooke's story, I'm looking forward to revisiting the world and seeing how Kay deals with a different character dynamic.

Return from Wicked Wind to One Good Book Home