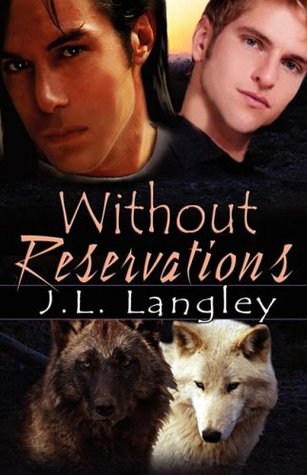 Veterinarian Chay Winston has yearned for his wolf mate since he was four years old. Since then dreams of hair like the sun and eyes like the sky have haunted him. In retrospect, he probably should have kept those desired attributes to himself, however, as even the idea of a white mate is enough to rile and upset his rigid and prejudiced Native American mother.

When the small white wolf is brought into his clinic, unconscious with a bullet wound to the head, Chay's physical reactions to its scent have him certain that his search for a mate is finally over. Much to his shock, the wolf making his self control disappear with arousal-laden alacrity is not only white, but also male, and Chay's no longer certain of anything, let alone what to think. Though he's pretty sure his mother's not going to be thrilled. Chay's not entirely sure he's thrilled, either, as he's not gay. But he can't deny he's drawn to the smaller wolf, and even more so to the slight, youthful man, and then there's that lifelong yearning for all the feelings and reactions he's finally experiencing...

Ah, well, it is the will of the Gods, after all.

Keaton Reynolds, PhD, hasn't been in town a month yet, but the young-looking professor of history is shot in the head during a run in his wolf form and wakes up in a strange truck with a strange man, the scent of arousal heavy on the air. It's been an difficult day for him. Now he's apparently found his mate, which is all well and good until he realizes that his mate isn't gay. And after a bad breakup with his last boyfriend, Keaton is determined to stay far, far away from straight men intent on experimenting with the gay wolf. He may be a werewolf, but he has no intention of howling at that particular moon ever again.

Two men from two different worlds, destined mates, drawn to each other despite their differences. And as Chay sets his mind to convincing Keaton that their relationship goes beyond sexuality, it becomes brutally clear that the gunshot to Keaton's the head wasn't some human poacher mistaking the werewolf as a true wolf. His mate is in danger from an unknown adversary, and Chay will do anything to protect him, because now that he's found Keaton, he's never letting him go.

Langley kicks off her With or Without series with a strong premise and appealing characters. I enjoyed the journey that Chay and Keaton embark on together, and I liked the paranormal aspect of the werewolf mythos. Unfortunately, there were several things that went awry in this book. On a technical note, the narrative lacked fluidity and polish and the dialogue was often clunky and lacked natural conversational flow. On the plot front, I think Langley pushed too many issues onto Chay and Keaton's shoulders and didn't give any of them room to develop into legitimate conflicts with satisfactory resolutions.

Meaty potential plot points like their racial and cultural differences, Chay's previous sexuality, them being werewolves and the mythos of that, the attempts on Keaton's life, Keaton's third form and wolf strength, the acrimonious relationship between Keaton and his family, and the issue with Chay's mom's intolerance didn't go anywhere once introduced. All of those issues were significant plot points that could have developed into a powerhouse of a novel, but instead they were glossed over, and almost all were quickly resolved with few ripples. Beyond the threat to Keaton's life, none of those points were ever established as secondary or ancillary plot arcs and none of them got more than cursory attention.

On a personal front, the relationship between Chay and Keaton isn't really to my personal tastes. I prefer my M/M romances with two strong male leads (alpha males...no pun intended), and Keaton - despite his apparent wolf strength - was too submissive in his physical and emotional relationship with Chay for me. I don't think Keaton was totally effeminate...not quite, anyway...but he definitely skirted the line. He's young and slightly built, his physical description fair of face and form, and Chay often refers to him as his "pretty baby." My preferences in M/M relationships lie elsewhere.

Despite the issues I had with this book, I did see potential for the series and I was heartened by the variety of the plot threads. Even though they weren't developed nearly as comprehensively as I would have hoped, there's obviously a lot of originality and creativity in Langley as an author and I hope to see it come to fruition as the series progresses.

Return from Without Reservations to LGBT-M/M

Return from Without Reservations to One Good Book Home