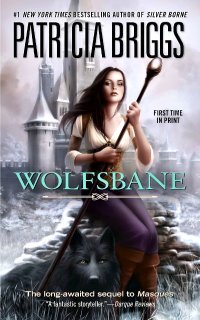 Aralorn has received the heartbreaking news that her father, the Lyon of Lambshold, has died. For the first time in a decade the shapeshifter spy returns home to mourn and bury the first man she ever loved. But going home isn't always easy and certainly isn't always painless.

It is while she's paying her respects to her father as he lies in preparation of burial that she discovers that rumors of his death are a bit precipitous. Ensorcelled by a complex black magic spell and guarded over by a mysterious malignant shadow that attacks Aralorn after she works her magic, the Lyon has been laid low by a malicious hand. Even Aralorn's powerful lover Wolf can't break the spell on his own.

Aralorn and Wolf have two weeks to find the source of the spell and deal with it before the black magic drains the life from her father. The only problem...the prime suspect is one Geoffrey ae'Magi, a horrifyingly brutal, sadistic mage with an unslakable thirst for power, and father of the Wolf once known as Cain.

Okay, there are two problems, because Geoffrey ae'Magi is dead.

Or so they thought.

Aralorn and Wolf must race to confirm the source of the spell and negate it before it makes that planned burial a necessity, then find the ae'Magi and stop him once and for all. But how do you fight someone who, even from beyond the grave, seems powerful enough to kill them all?

Patricia Briggs is a consummate storyteller. While Wolfsbane and its predecessor Masques are two of Briggs' earlier works, though Wolfsbane just recently published, the stylistic integrity of her craft is strongly in evidence. The plot is a bit linear and lacks the depth and complexity of her Mercy Thompson series, but the creativity in the mythos and the exemplary characterizations are strong contenders with her latter work.

Simply put, I'm very fond of Aralorn and love Wolf. This character-driven tale wouldn't be nearly as entertaining if it wasn't for the fun mix of Aralorn's stubborn tenacity, quick wit, and confidence in her abilities, tempered with a realistic self image and a dedication to protecting those she loves at any and all cost. Wolf is a complex and damaged man, intensely powerful in human magic but completely out of his depth with green magic. He's a king of self control, keeping his emotions bottled deep after a childhood fraught with trauma, manipulation, and the oily stain of black magics. He's got a lifetime of regrets for his misspent youth and is physically and emotionally scarred from having a father who is a murderous, megalomaniacal psychopath who has spent years framing him in the court of public opinion...or trying to kill him. Wolf's issues are so deeply ingrained that they're manifesting as a death wish, throwing a major wrench in his magical mojo, and panicking Aralorn.

The relationship between them is one of my favorite things about this book. It's a rare treat to have as protagonists an established, loving couple with so many years of history between them. They know each other intimately, understand each other so well, and accept each other, wounds, warts, and all. It changes the dynamic of the romance of the book in original, unique ways that I appreciated.

I wish there had been more exposition provided throughout the book and more physical description of the world around these fantastic characters. And I don't know if I'd recommend this one for readers who haven't read Masques (yet). Those unfamiliar with Geoffrey and the origins of Aralorn and Wolf would, I think, miss out on the full extent of the emotional impact and rich pathos that comes from what was introduced in that book. I'd definitely recommend reading Masques first.

The main conflict of the plot arc was good, but I had some issues with the way the conclusion developed. I found aspects of it a bit too convenient and the big reveal struck me as being slightly cliched. There were also some plot threads that I wish had been more fully developed.

Despite those few issues, the strength and freshness of the relationship between Aralorn and Wolf and the charming interactions between Aralorn and her family really endeared this book to me. It felt more personal to Aralorn as the main character, and that made it easier to emotionally invest in the story. The ending did have one other impact. It left me wanting a lot more. I'm such a big fan of Aralorn and Wolf and there is such tremendous potential for future development for them. Knowing, however, that Masques and Wolfsbane were earlier works from Briggs, I worry about seeing them again. I'll be hoping for more.

Return to Top of Wolfsbane