It's a Mad Bad Crazy World 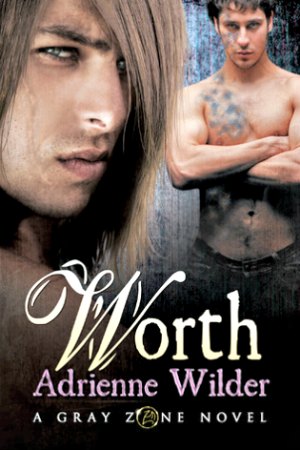 There's nothing Liam wouldn't do, nothing he hasn't done to protect and care for his two younger brothers. His stepfather is a drunk, sadistic bastard and Liam is all that stands between him and the tattered remnants of their innocence. His own he traded to insure Chris and Kevin keep theirs as long as they can.

Liam does what he can to assure his brothers don't hear, even as his screams echo in the shadows along the broken streets of the Gray Zone. He's been brutally raped, beaten, cut, burned...his body sold over and over to feed his stepfather's perverse hungers and seed his vices. He's been used and abused by sick, brutal men. And he'll keep taking it, knowingly, for as long and as often as it takes to keep Chris and Kevin safe.

It's not like there are a lot of choices in the Gray Zone, that colorless, hopeless strip that's stuck between the shimmering lies that humanity still tells itself and the gritty darkness of the Dens of the Kin, more honest but infinitely more dangerous. It's not a happy life, it's sure as hell not a good life, but it is life.

The night Liam first sees the Lesser-Bred Jericho is the first time he feels a spark of sexual need and hunger. What he can't fathom, what makes no sense to him whatsoever, is how Jericho looks at him. Not like he's a freak, scarred and ugly, or that he's dirty and over-used, shattered and alone, though Liam knows he's all those things. But with an unearthly beauty, Jericho stares at him as if he's...precious, special, and deeply, deeply desired.

It's a gift Liam doesn't trust but once felt, can't escape, and it hearkens a change that will alter every aspect of the desiccated life Liam is struggling to live. It will change...everything. And in so doing, will threaten the two children Liam has worked so damned hard to protect.

There's something about this series that just levels me. In fact, I hadn't actually planned on reading this book after the first left me feeling so shaken and disturbed. I like dark fiction well enough, but this series goes beyond such tepid terminology. It's a gut-clenching, brutal peregrination through a land stripped of anything recognizable as humanity, desiccated, devastating. Horrifying.

And then there are characters like Liam. His unwavering concern for Chris and Kevin and the conscientious care he provides them in the face of the wretchedness of their home life made for some truly captivating reading. I fell in love with him and his siblings, felt every ache and pain that the trio suffered throughout the book, every bloody, caustic wound inflicted.

Liam's life in the Gray Zone leading up to his becoming is the driving force of the plot, and it is so damn heartrending. The nightmare he endures to protect the brothers he loves is inconceivable, and the layers of betrayal he faces are enough to leave grown men blithering like idiots. How his heart and soul stayed as pure as it did is a mystery, but it made for some damn compelling storytelling as the tension and unrelenting sense of impending doom grew larger and larger.

I love the world that Wilder has created for this series. It's gritty, deadly even, but brilliantly imaginative. The Kin, a dragon race that serves as the impetus behind the existence of the Gray Zone in Atlanta, hasn't had an active role in the series to date, but their Lesser-Bred children have been more than enough to carry the series so far.

Make no mistake, the Kin aren't human in thought or deed, and neither are the Lesser-Bred once they've transitioned. They feed on sex, blood, and flesh. Period. Their needs and their habits are often...uncomfortable when viewed through lenses colored with human sensibilities and morality.

On the other hand, children are valued highly by Kin. They don't smell of sex, so they are not used for sex, and they are never victimized by Kin or Lesser-Bred. Ask Liam how he feels about that particular fact. Holding that up against the life Liam has been forced to lead, and I can't help but feel the monsters of this series aren't the ones with scales. The dichotomy makes for a powerful and intriguing theme that's being threaded through the series.

This isn't a series for the faint of heart, and it's not one I'd recommend for romance-only fans. Though the it's listed as M/M romance, I disagree with that categorization. Dark urban fantasy, yes. Very, very dark. There's a lot of sex (warning: not all of it consensual), but this book has even less "romance" than its predecessor, and neither book ends in anything resembling a Happily Ever After for its main characters. It's just not that sort of world.

Frankly, I'm utterly and completely addicted to it. The writing is strong, the world is complex and the characters reach in and claw out a nest for themselves in my heart. At this point, I can't not read it. I can't wait to see what Wilder comes up with next, even though I'm fairly confident I'll feel nearly gutted and disturbed by parts, if not all of it. Personally, I'd like a closer view of the Kin than we've gotten so far, but whatever story it is, I'm in. I'm absolutely all in.

Return from Worth to Urban Fantasy Genre

Return from Worth to OGBDA Book Reviews Home